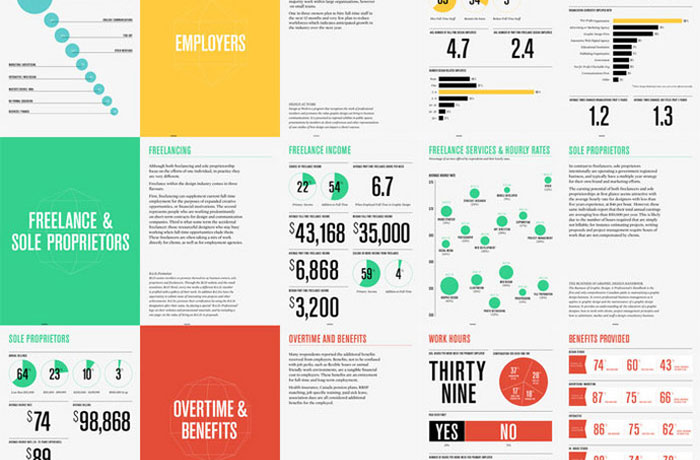 TORONTO, April 26, 2013—Despite persistent economic challenges and pressures such as offshoring,  salaries for creative professionals across Canada continue their steady climb in key categories, while industry insiders report widespread optimism for their future career and business opportunities.

Key highlights from the 2013 CreativeEarners Survey—an annual report documenting salary trends, as well as key challenges and opportunities across Canada’s creative sector—reveal a slow, yet positive, upward salary trend across creative occupations since the Great Recession of 2008-09. Senior graphic designers, for example, saw their average salaries climb to $55,000 last year, up from 50,000 in 2008. Copywriters experienced similar salary growth with average wages increasing in that occupation to $55,000, from $48,000 over the same period. Indicative of the move to greater digital integration and innovation across the industry, online specialists such as web producers-managers reported some of the steepest wage increases with average salaries growing to $64,500, up from $52,500 in 2008.

The survey did, however, highlight a major challenge for creative professionals. While respondents reported working an average of 39 hours per week for their primary employer, a whopping 71 per cent of those polled said they are not paid for the over time they work, compared to 29 per cent of professionals that are compensated for working extra hours. Graphic designers were most likely to be paid overtime, followed by developers/programmers and content editors.

Challenges such as overtime compensation aside, upward salary growth trends at least partly explain creative professionals’ positive outlook: the survey found that 79 per cent of respondents were optimistic about their future, with just 5 per cent stating they were pessimistic and 16 per cent feeling uncertain. In addition, fully 63 per cent of employers plan to hire full-time creative staff over the next 12 months, while 34 per cent plan to maintain permanent staffing levels at the current rate and just 3 per cent intend to reduce their full-time head count. Forty-eight per cent of employers have either not used, or plan to decrease their use of, freelancers over the next 12 months, while 28 per cent plan to utilize more freelance talent.

“The findings of this year’s CreativeEarners Survey are a testament to the resilience of our industry, even in the face of lingering economic challenges,” said RGD President Lionel Gadoury RGD. “The fact that salaries are still growing steadily in key categories demonstrates the remarkable value that organizations are placing on strong creative work.”

The CreativeEarners Survey is produced by the Association of Registered Graphic Designers (RGD) in conjunction with Toronto-based creative staffing and workforce management firm Creative Niche. The 2013 edition polled 2,890 creative professionals from across Canada, who reported an average of 11.2 years working in the creative field. Of those surveyed, 64 per cent reported training as graphic designers, followed by 22 per cent in English and communications or fine art, seven per cent in advertising and marketing, and six per cent in interactive/web design.

Interesting findings also emerged when respondents were asked to name key considerations that influence their decision to work with an organization. The survey found that 63 per cent of respondents said salary or hourly rate was their main concern, followed by 40 per cent who cited quality of work and 27 per cent who indicated that work-life balance was a major deciding factor. Rounding out the top five reasons, 24 per cent of those surveyed pointed to professional growth, followed by 15 per cent who said that the location of their workplace would be a key consideration.

“Although compensation is a primary concern for creative professionals, it’s clear that other factors such as quality of work and work-life balance also play a key role in influencing their career decisions,” said Creative Niche President Stephen Hodges. “There is no doubt that employers need to provide competitive salaries, but must also focus on maintaining a strong employer brand by constantly nurturing non-wage related workplace considerations if they hope to attract and retain  top creative talent.”

Download the free 2013 CreativeEarners Survey results as a PDF or iPad app: www.creativeearners.ca

Creative Niche
Creative Niche is a creative recruitment and workforce management firm that connects leading corporations and agencies with top creative talent from around the world.