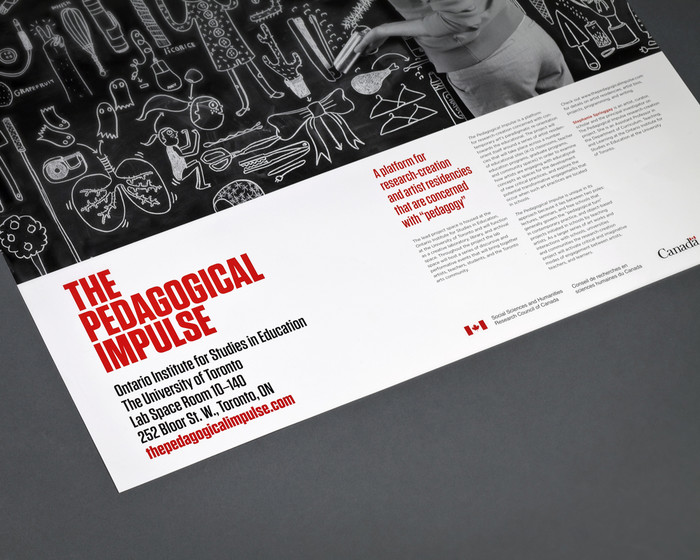 The Pedagogical Impulse is an artist residency and research project that has initiated a number of experimental, critical and collaborative projects in educational sites in Toronto (K-12 classrooms, teacher education programs, graduate programs and community spaces). The par­tic­i­pat­ing artists Sarah Feb­braro, Han­nah Jick­ling, Helen Reed, Hazel Meyer and Rodrigo Hernandez-Gomez work with collective, participatory and social meth­ods and address issues of learn­ing, know­ing and relationality in their exist­ing practices.

“The Pedagogical Impulse is unique in its approach because it lies between two poles: lectures, seminars and free schools that generally govern the pedagogical turn in contemporary practice, and object-based projects initiated in schools by teaching artists.”

Project
Acme was commissioned to produce a promotional poster for the artist-residency component of the project, and from the success of this poster, Acme’s involvement was expanded to encompass a visual identity (derived from the poster design) for the project and a redesign of the project website.

Audience
The project’s audience includes the arts and academic communities, both locally and internationally.

Concept
The poster was produced before the residencies had begun, so the first challenge was to promote the series without any artwork available from the participating artists. This is a common dilemma when producing promotional material for gallery shows and exhibitions*.

My initial concepts focused on the architecture of educational spaces, using the 'Twisted' series of architectural distortions by Nicholas Kennedy Sitton as a reference point. I explored using abstracted kaleidoscopic photography of the classrooms at the Ontario Institute for Studies in Education (OISE), the project’s home base.

The ubiquitous blackboards (a classroom fixture that is no doubt soon to be replaced by "smart boards") suggested another possible motif. The first blackboard concepts were very abstract, and used the chalkboards as a background for typographic treatments. These explorations were inspired in part by the wonderfully moody blank board photos of photographer Matthew Gamber. But the concept that soon formed and took hold was to treat the poster itself as an extension of the residency project.

We engaged participating artist Hazel Meyer to collaborate on producing a blackboard illustration that would both illustrate the poster and eventually form the central motif of the project’s visual identity.

Process
Fighting a cold on the day of the artwork photo shoot, artist Hazel Meyer soldiered through 6 hours of chalkboard illustration onsite in a classroom at OISE:

Her dense, branching illustrations were composited into one seamless image for the poster, but my favourite images from this project are the photos of Hazel drawing, with the fluorescent light fixtures, carpet, and all the paraphernalia of the classroom in full view. I love the contrast of the drab room with Hazel’s exuberant diagrammatic illustrations.

Later in the lifespan of the project, as documentation accumulated and the project website became more complex, I was commissioned to redesign the website for the project.

The website is a unique hybrid — both  exhibition and research site — with a wealth of documentation and resources for artists, academics and educators, including a suite of interviews with artists and academics, which were released as PDFs, entitled “The Living Archive.”

I had worked with Stephanie Springgay on previous poster projects for Mammalian Diving Reflex, an award-winning research-art atelier dedicated to investigating the social sphere, where she served as a Youth Advisor. (Projects: Dare Night: Lock Down and Night Walks with Teenagers)

When I have the good fortune to work with a great client, I am truly thankful, and Stephanie is a great client. She’s open-minded and collaborative, values art and creativity, and perhaps most important of all, she and her colleagues have a contagious enthusiasm for their work.

A chief concern of the website redesign was that it be easy for Stephanie and her colleagues to maintain despite its complexity. It was also important that the extensive documentation of the many branches of the project be presented in a clear and compelling way. The solution to the goal of self-sufficiency was the use of a content management system that is user-friendly and open-source: Wordpress, a very intuitive system even for lay people. The website content itself was organized into project galleries. Visual material was organized into slideshows.

A series of interviews with artists called “The Living Archive” is a key part of the project. These interviews, distributed on the website as PDFs, provided another opportunity to extend the visual identity of the project. For these documents we took a more "magazine-like" approach to the layout than might be typical for an academic paper.

Result
“The website designed and created by Michael Barker surpasses expectation. The site has attracted international attention in the academic and art community for its design and functionality, in addition to content. I wanted a site that would feature both images and a considerable amount of text, which could be cumbersome, and Mr. Barker's use of slide shows worked wonderfully. Working with Mr. Barker is always a privilege – he has a unique design sensibility and is very attentive to the clients needs and expectations.” — Stephanie Springgay, The Pedagogical Impulse

Designer Takeaways
In my experience the success of design projects hinges entirely on the relationship between the designer and the client — that means working to understand your client and their needs and respecting their intelligence and capabilities. Establishing a good, collaborative relationship is one of the most rewarding parts of the design process and is an absolute necessity to produce successful work.

Client Takeaways
I was fortunate with this project to have a workable budget, but when budgeting for promotional materials clients should consider including a line item for commissioning photography and/or illustration in addition to design and production fees. It is common for clients to only budget for "design" and "printing" when the success of many projects relies on contributions from multiple graphic artists.