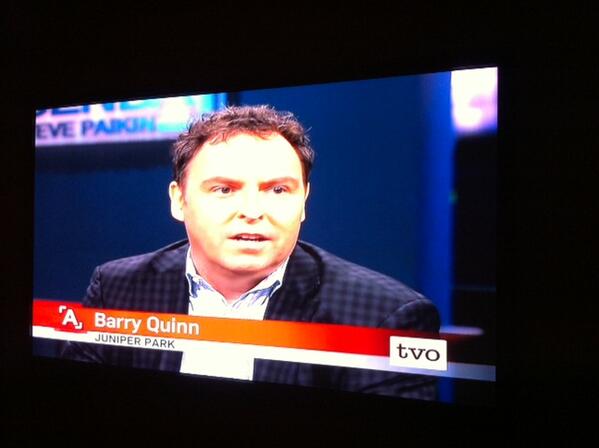 In December, TVO’s The Agenda chose to explore a phenomenon that is intimately tied to the practice of graphic design – the role images increasingly play in our lives. They wanted to investigate “what the rise of the image means to our ability to communicate with each other and what kind of literacy people need to successfully engage in an image-thick, technology-laden world.”

The show’s producer reached out to RGD seeking an expert panelist on the topic from the design community. After putting forward the names of four Registered Graphic Designers, Barry Quinn RGD of Juniper Park, a member of the RGD Expert Bureau, was selected.

As co-founder and Executive Creative Director of Design at one of the largest ad agencies in Canada, Barry offered a multi-disciplinary design and advertising perspective. Other panelists included Paul Roth, Director at the Ryerson Image Centre; Peter Vidani, Creative Director at Tumblr; and Photojournalist Rita Leistner.

Early on in the discussion, Barry made an important distinction between an image and photo, arguing that, “the true photograph has probably been dead for 5 years at least.”

On the importance of imagery, Barry explained that images and photos have never been more important in humanity. “People are sharing words through pictures and sharing pictures of things that they can’t describe through words.”

Agreed Paul, “communication is what photography has always been about.” Though Peter argued that photography can also be very personal. “People use Tumblr to capture things for themselves,” he noted.

When the conversation turned to imagery in business, Barry made a powerful statement: “Everybody is a critic because everybody is also a creator.” He went on to explain: “It has never been easier for the individual and harder for the professional. It’s a harder job in a world awash in images for companies to define a moment or brand image as they have in the past with such icons as Marilyn Monroe. At one time, corporations controlled our image landscape, now people look at billions of photos by amateurs…it’s almost impossible to stand out.”

Rita posed some interesting questions: “Who has the authority to teach people how to read images? How do we know what’s true? If we don’t know who made the image, how do we know what context it was taken in?”

“I love the wild west of it…almost everything’s crap, average, it’s the reality of life,” said Barry. “...look what happened with music. The electric guitar. Did Les Paul and Fender have a responsibility to teach people music? No, and thank God they didn't because the Sex Pistols happened! The next syntax might not be created by the people that we think control images, it might be created by some kids in their bedroom, which is what happened to music - and to me, music got better when more people were allowed to screw everything up.”

The episode, which aired December 18 and again on January 6, may now be viewed online here.

To find out about becoming a member of RGD's Expert Bureau, email .