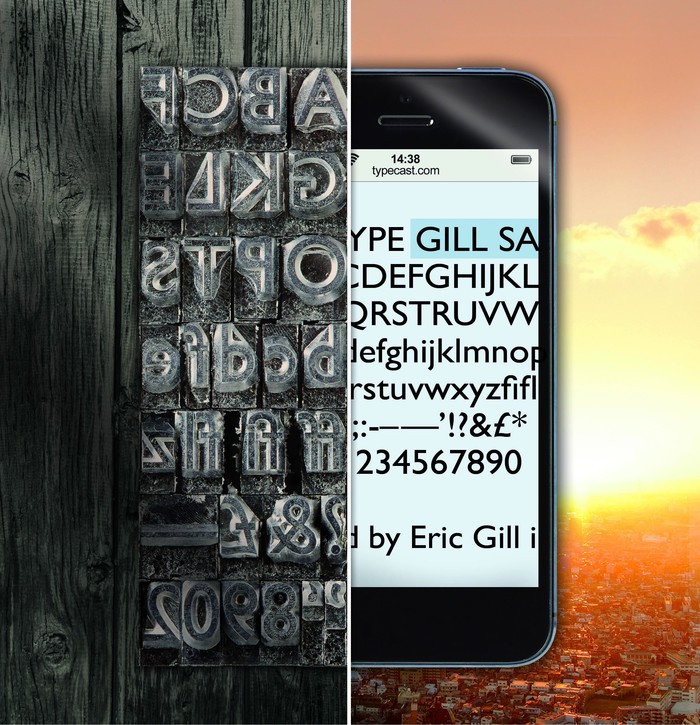 Director of Words & Letters at Monotype, Allan Haley reflects on trends that shape the past, present and future of font design.

Contrary to popular opinion, Gutenberg did not invent movable type, nor was the Bible his first use of type. Neither did he invent the printing press or printing ink. But Gutenberg did invent the adjustable mold, which enabled an artisan’s model to be replicated many thousands of times. These were the first fonts. And they’ve been in a state of reinvention ever since.

At first changes came slowly. The first major transformation occurred in the 19th century in the form of mechanical typesetting machines. They would displace hand set type and provide more information to more people than ever before. Engineers and type designers had to work in harmony to develop a new breed of fonts that were compatible with these large and complicated typesetting machines.

The next change came more quickly, when mechanical machines were replaced in the 1950s by phototypesetters. These machines had virtually no moving parts and would set type at strobe-light speeds. But the fonts for phototypesetters had to perform within a very different environment than previous devices. Again, the solution was a collaboration of engineers and type designers reinventing fonts.

Typesetting and font technology changed again in the mid-1980s, when digital technology brought “desktop publishing.” For the first time, fonts were something you couldn’t hold in your hand. Fonts were data, and the same font files could work on a variety of output devices. At the same time, new font technologies were needed to enable this fluidity. Anti-aliasing, bitmap tuning, character hinting and compaction algorithms became part of font development.

In 2010, web fonts that can be dynamically downloaded to computer desktops and mobile devices in a heartbeat became commercially available, thanks to support coming to all the major browsers.

Today, fonts are in virtually all devices, such as e-books, tablets and mobile phones. Fonts are even in the user interfaces of “white goods,” like refrigerators and washing machines. In many cases the very design of the fonts that support these environments has been modified to enable the most legible display.

Where will fonts be tomorrow? Some say that augmented reality and wearable devices will be part of everyone’s daily life. It’s also been said that by 2020, there will be more devices than people online, and that universal language translation will be commonplace on every device. All of these communication tools will need fonts, and more than likely new fonts to take advantage of their technologies.

While fonts have changed dramatically over the last 500 years, their purpose has not. Fonts have always served to provide communication that’s clear, legible and easy to read. More and more, the developers of devices that use fonts are becoming aware of this. The font used in the new Apple WatchTM is an example. Apple® created a new custom design in-house to deliver at-a-glance, highly legible information within the parameters of a 38 to 42mm screen height. An off-the-shelf font simply could not do this. Automakers have realized that special “human machine interface” fonts are vital to both the legibility of automotive screens – and to the consistent branding of the vehicles. When fonts are required to provide complicated information in health care devices, they should be designed and technologically optimized to ensure the best, quickest and most accurate comprehension.

While the function of fonts has not changed, the scope of the information and delivery devices has – dramatically. They must do much more than provide relatively simple information on parchment or paper. Fonts changed the world in the 15th century, and they are doing so today. They must, however, continue to evolve and adapt as quickly as technology. Type designers, product and software engineers need to continue to collaborate on the development of fonts that will take us into the future. Now, more than ever, fonts must be considered as part of the DNA of all devices and technologies that take advantage of them.

Allan Haley will moderate a panel on The Future of Typography with Aaron Draplin and Erik Spiekermann at DesignThinkers, Nov 6-7 in Toronto​.