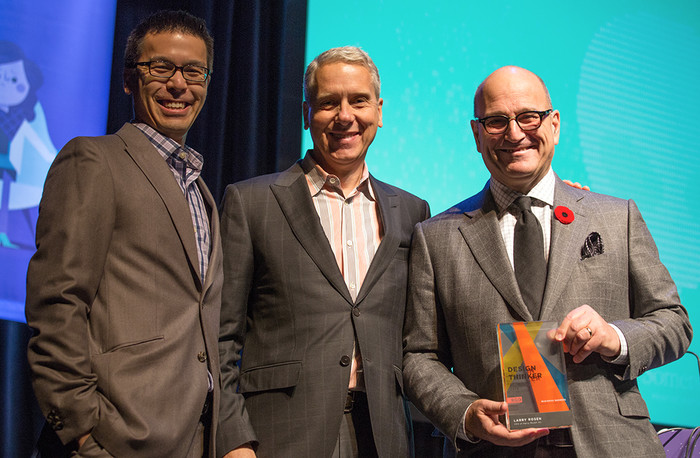 The Association of Registered Graphic Designers and Rotman School of Management recognize the unique role design plays in the success of the menswear giant.

TORONTO, Nov. 13, 2014 – Amidst the 15th annual DesignThinkers Conference – the largest annual gathering of creative communicators in the country, Harry Rosen CEO Larry Rosen was named Canada’s ‘DesignThinker of the Year’. The award was presented by the Association of Registered Graphic Designers (RGD) and Rotman School of Management.

In its second year, the DesignThinker of the Year Award recognizes a Canadian corporate leader who uses design and innovation to achieve business success. MEC CEO David Labistour received the title in 2013.

“I am honoured to win this award”, Larry stated during his acceptance speech. “I’m most appreciative to all the designers who help Harry Rosen express its brand with warmth and personality, and give it life and vitality. Those are the real winners.”

Bob Hambly, RGD VP of Communications, said: “Larry knows that, like a fine tailored suit, the details are important to any design. He surrounds himself with people who are great at their jobs and encourages them to do their best work.”

About the Association of Registered Graphic Designers (RGD)
RGD works to establish and promote professional standards and best practices in the graphic design industry. Representing over 3,000 members, RGD is a hub for the community, promoting knowledge sharing, continuous learning, research, advocacy and mentorship.

About The Rotman School of Management
Rotman is redesigning business education for the 21st century with a curriculum based on Business Design™ and Integrative Thinking™ and by fostering a new way to think that enables the design of creative business solutions.