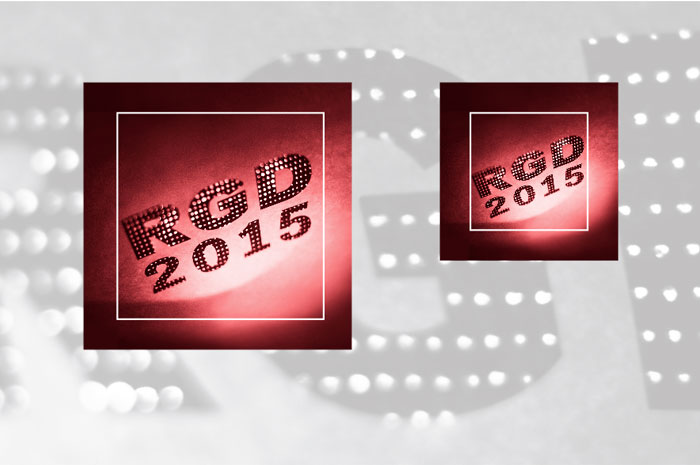 "RGD's purpose is to highlight the importance of professionalism in the design industry, so we used the idea of highlighting or 'spotlighting' the RGD logo in print. We achieved this effect by poking numerous holes through a piece of paper to give the impression of an illuminated sign, which we then photographed and edited as a duotone in the RGD colours." Meggan Michaud RGD, Principal Designer, Design de Plume

The annual membership sticker program launched in 2013 with a design by Phil Mondor RGD. The 2014 sticker was designed by Jim Ryce RGD.

Thank you to Print Sponsor Somerset and Paper Sponsor Unisource for making the 2015 Sticker possible.

Design de Plume is a small studio in Northern Ontario that thrives on collaborating with selected organizations to turn ideas into action. Partners, Melissa Deschenes RGD, Meggan Michaud RGD and Jennifer Taback RGD, produce a whole variety of work that reflects their passion for creating communications that are uniquely inspired and tailored for each job. All of the partners are graduates of Cambrian College’s Graphic Design program and promote professionalism in the design field through active participation in RGD and the Sudbury Design Society.

To find out more about the selection process for the 2015 Membership sticker design, click here.

If you are interested in being considered for the 2016 Membership sticker design, or if you would like to find out more about getting involved with RGD's upcoming and ongoing programs, fill out our online form here.