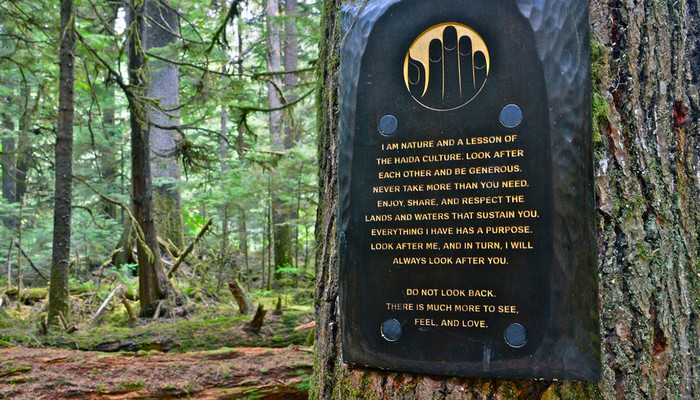 This project was selected as a winner in the Government-Initiated category of RGD's 2014 So(cial) Good Design Awards.

In 2013, our team came across an RFP from BC Parks for a project to design interpretive signage in a Provincial Park. We didn’t win that gig, but what we did win was much bigger: the praise of the communications team at BC Parks who said that Flipside's proposal was “too creative” for the interpretive signage project. They had something else in mind for us. Fast forward to a year later, when we found ourselves working on the Golden Spruce Trail Experience.

The timeline spanned one year, taking into account all of the pushes, shoves, set backs and bumps that go along with any creative project. The goal was to have the Experience ready to coincide with the trail upgrades scheduled for April 2014.

The project kicked off with a 30-seater plane ride to beautiful Haida Gwaii, a series of islands at the most westerly point of Northern British Columbia, where our key team leads had the opportunity to experience the trail first hand. The trip involved meeting local stakeholders and connecting with Haida people to pepper them with questions on the trail, and then hiking it again solo to better connect with the magic that the project would need to represent.

From the get-go this was a collaborative community project. We felt very privileged to work with BC Parks, Haida Gwaii government and the Haida people to reclaim the story of the Golden Spruce and share the rich culture, history and beauty of the land with both locals and tourists.

After interviewing key stakeholders in Haida Gwaii, walking the trail back and forth a million times over, listening to the Yakoun River roar and soaking up stories and folklore from the people of the community, we were ready to begin conceptualizing what the project would become.

We set two goals for ourselves: 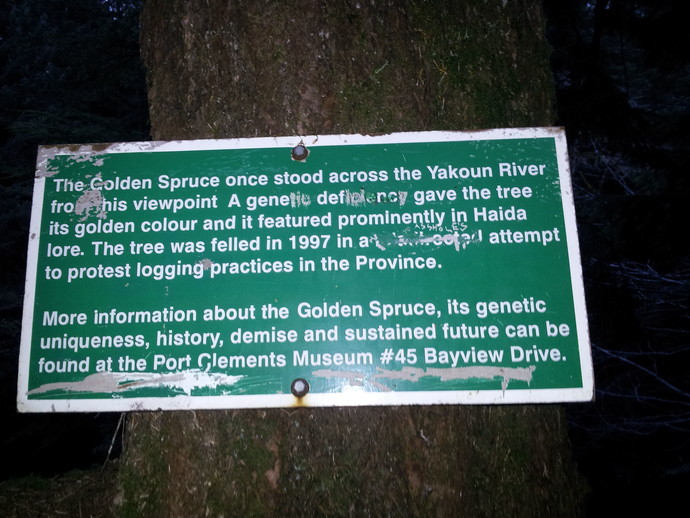 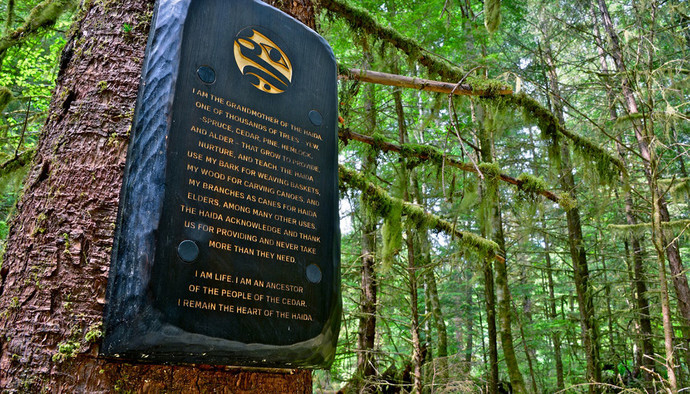 The concept we chose was based on an idea that would emerge directly from the forest itself rather than add something new.

We worked with several Haida locals, artists and elders who monitored our progress with intense passion and verified the authenticity of our content and ideas at every stage. We worked with BC Parks to source local carving phenom, Ben Davidson, a long-time island resident and Haida native. In addition to the clout and prestige Ben brought to the project, the custom native carvings he created beautifully represented the folklore of the community and became the basis of the Golden Spruce Trail experience.

Walking the trail, we pinpointed five key locations that together would tell a complete story of the land, the people, the history, the significance of the Golden Spruce and how all these elements influence the future of the community. 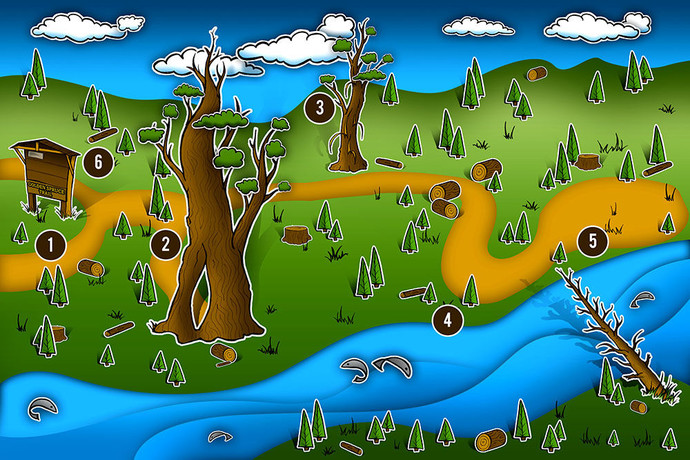 Each element of the design was a collaborative effort between BC Parks, the people of Port Clements BC, the Haida Nation, the mayor and the Flipside team, including the word choice, the typeface, the size of the signs and the ideas they conveyed. We made sure that all stakeholders were in the room for meetings, either in person or via Skype, and cc'ed everyone on the emails that circulated for each step of the project.

This type of collaboration can often lead to a 'too many cooks in the kitchen' situation, but for this project it worked swimmingly. Looping everyone in at every phase - even if their input wasn't necessary for a particular decision - helped us ensure that everything tied together seamlessly. It was always clear that the objectives of each group were being met at each stage. 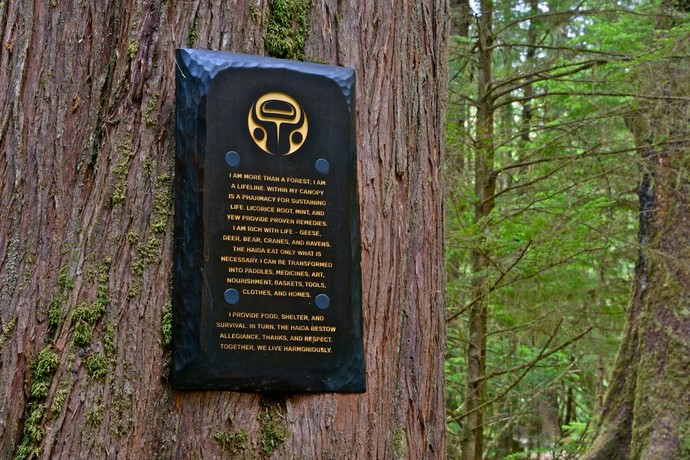 This was a very culturally sensitive project. The story of the Golden Spruce is etched in the hearts of the people on Haida Gwaii, and we came to the community as a Vancouver company with no connection to the island. It was essential for us to find a way to achieve the marketing goals of the project, to increase tourism, while also appeasing government stakeholders, respecting the culture and preserving the landscape.

We had multiple groups with a keen interest in our work and the success of this project – all with distinct ideas about what the outcome should be. For BC Parks, the goal was to update the signage and restore the trail, while the main objective for the Mayor and the City of Port Clements was to draw tourists and generate tourism revenue in the community. Meanwhile, Haida First Nations wanted to keep the trail sacred and authentic - to reclaim the Golden Spruce Trail as a story of light and to share this experience with the public. Our strategy to reconcile these was both simple and complex: identify a solution that would allow us to be conscientious sign designers for BC Parks, brilliant marketers for Port Clements and humble stewards of the Haida land, people, and culture.

With Flipside based in Vancouver, another challenge was ensuring that everyone working on the project had the opportunity to truly experience the trail. The team members on the ground in Haida Gwaii taped video and audio of the entire trail experience with no voice-over so that those unable to make the trip could see, hear and bear witness to the hike. Another video was filmed as we walked through with a city councillor and BC Parks officials who told us the stories of the land and a third video documented the experience of walking the trail with a native interpreter. These different perspectives of the trail are what really lit up creativity. 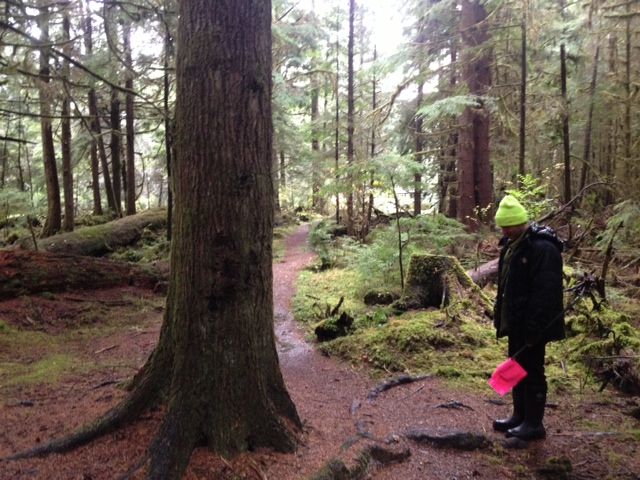 The new Golden Spruce Trail Experience launched in June 2014 to community applause. The Haida felt the design authenticated their experience, the locals felt it heightened the beauty of the land and the mayor beamed with pride. Over time, success will be measured in foot traffic, but the positive feedback we received from individuals who view the trail as a piece of their hearts was a strong indicator of what we achieved with this project.

From the very start we made an effort to be sensitive to the cultural and environmental impact of our design. While we were proud to achieve the marketing objectives, we feel the real success was that we were able to accomplish this while respecting the land and delivering an experience that adds value to the existing magic of the Golden Spruce Trail. 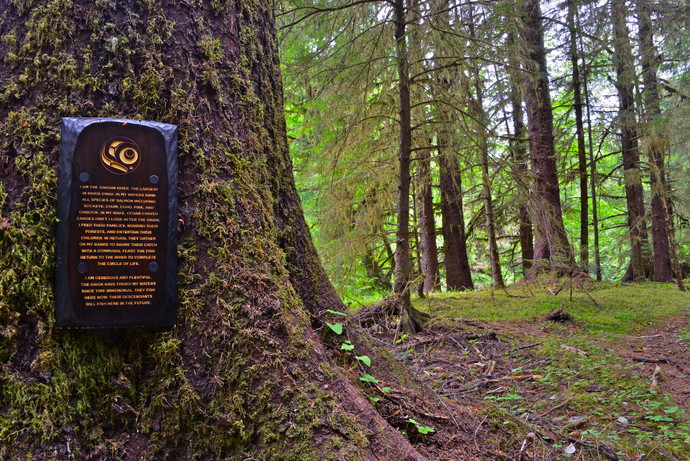 “Flipside was absolutely committed to the project and stepped back to dream big before jumping into the details. They were uncompromisingly optimistic and developed an interpretive sign experience that this 102-year-old organization has never done before. They took creating signs beyond convention and aimed at an integrated interpretive park experience.” Craig Paulson, BC Parks Section Head, Project Manager 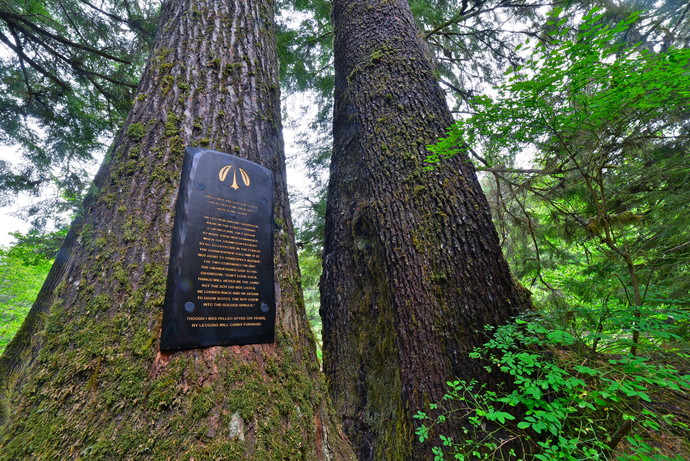 For our team, we felt a personal connection with this project. We fell in love with the client, the land, the history, the culture, the people and the folklore. By understanding the cultural significance of the project and engaging in true collaboration, we were able to create something with personal significance for the community that went beyond bottom line results.