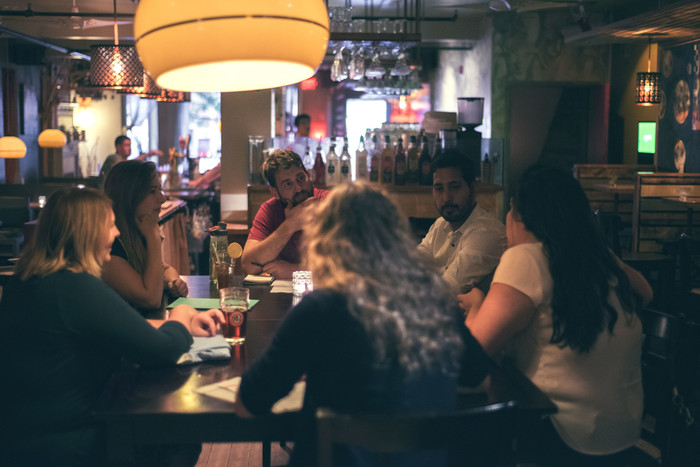 The Design Social event series provides opportunities for young designers to sit down with established Registered Graphic Designers for casual conversation about the industry, covering diverse topics from the inner workings of the industry to how to deal with "boring" projects. The event format allows all attendees to hear from both RGD guests, splitting the group in half to sit down for an unscripted conversation. Guest switch tables halfway through the evening to begin a new discussion with the other half of the group.

Scott  has 15 years of television broadcast experience under his belt. He got his start at CHUM Television, working on graphics for their roster of channels in an industry that looked much different than it does today. Scott stuck with the channels through a series of mergers and is now a Senior Motion Designer at Bell Media, where he creates on air graphics, primarily for MuchMusic, MuchMore and MTV.

Scott spoke to the group about the changing landscape of the television industry and, with it, the ever-changing abilities of motion design. He touched on the importance of research, stating that "nine times out of ten, I don't know how to make the thing I'm going to make," because the capabilities of 3-D design are changing drastically from year to year, constantly getting easier, better and faster.

When asked about process, Scott talked about his efforts to mentally develop an idea as far as possible before executing the work. In his opinion, the beauty of design is the process—a designer can plan something amazing, but the plan needs to be constantly altered during execution, which makes the final product somewhat of a surprise.

Scott's parting advice to young designers is to make sure you're having fun, and if you aren't, take advantage of the mundane projects so you can explore ideas in spaces where less people are watching. He urges recent grads to keep learning, because "just because you've been doing something a long time, doesn't mean you're better."

Mark is Partner and Creative Director at TBD Studio. He has extensive experience building brands both large and small, including Honda, Labatt, Rogers, Bell, LCBO and many more. He recently left his post as Design Director at Compass360 to open TBD Studio.

Discussions with Mark centred around his recent transition from studio environment to self-employment. He had hit a point in his career where he didn't know what the next move was, so he took a risk and went out on his own. He provided insight into the challenges of working for yourself, most notably the need to be both designer and business person. He urged everyone to continuously educate their clients on the value of design and to justify the process, prices and outcomes.

When asked about the future of design, Mark hypothesized that designers will likely be more involved in content creation and strategy. He cited the observation that designers are already spending more time positioning and problem-solving for their clients than they were five years ago.

Mark was also asked about his standpoint on awards, of which he's received many. His view is that "having work in an awards show should not be the goal of any project. It should not be the first thing on your mind when you start a project. We don't design to get awards. We design for a specific purpose, for both the client and the communication needs." Though he does believe that a great way to alter your attitude towards a "boring" project is to ask yourself, "can I make this an award-winning project?"

Thank you to both Scott and Mark for taking part in the event and sharing your experience and advice. The RGD Provisional Committee will be hosting the next Toronto Design Social on October 20 at No One Writes to the Colonel, with guests Jennifer Weaymouth RGD, Founder and Creative Director at Weaymouth Creative and Yen Chu RGD, Creative Director of Design at J. Walter Thompson Toronto. Register here.