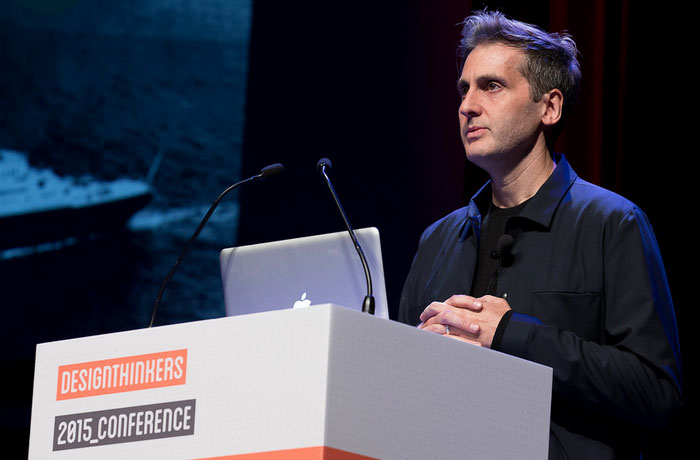 DesignThinkers has landed the Association in the news these past few weeks. Conference speakers and RGD's DesignThinkers of the Year were recognized for their design thinking legacies and exciting presentations.

"The RGD DesignThinkers Conference continues to consistently bring key design thought leaders to inspire and demonstrate how they are changing the world for the better through the use of strategic design. The international flavour of speakers gives an amazing view of the trends and innovation happening around the world and how top companies are embracing Design Thinking to innovate. This is more than just a show and tell type of conference, it draws designers from all over to join the discussion and experience some truly inspiring sessions that help them grow in their careers."
- Wendy Millard RGD, Chair of the PR Committee

DesignThinkers 2015 speaker Sree Sreenivasan had a phone interview with The Globe and Mail just prior to arriving in Toronto. The published article, which ran in the printed paper on November 12, covered his contributions to the MET through digital and social media, arguing that he and his team were said to "have made the Met one of the most influential cultural brands on the web".

"Everything about Vanity Fair magazine looks different today than it did in 2011. And if you didn't catch it all happening, that's because Chris Dixon was doing his job." Chris Dixon, Design Director for Vanity Fair was interviewed by CBC Arts in preparation for his conference presentation. CBC Arts also interviewed infamous Canadian industrial designer Karim Rashid while he was in town for the conference, and crafted this hilarious video about his take on Christmas.

The Toronto Star sat down with book designer Coralie Bickford-Smith and lead graphic designer of The Grand Budapest Hotel Annie Atkins following their talks at the conference. They published a piece discussing Bickford-Smith's successful redesign of many literary classics for Penguin and shared an in-depth conversation with Atkins on the role graphic design played in setting the scene for Wes Anderson's The Grand Budapest Hotel.

TrendHunter.com was in attendance, and following the event they published a piece on Josh Clark's "The Magic of User Experience" keynote and a more in-depth piece on the smart inhaler that Josh showcased in his presentation.

Journalists from Format Magazine interviewed Frank Chimero and BuzzFeed VP of Design Cap Watkins at the conference. They published a piece discussing design, personal crutches and causing mischief with Frank Chimero and created a BuzzFeed-style list of the top 5 takeaways from their chat with Cap.

Christopher Rouleau from Uppercase Magazine provided a breakdown of key points from a variety of different keynote presentations from both days. He even turned some significant quotes into beautiful typographic art, which he shares with us.

Representatives from DesignEdge attended the conference and published two wrap-up pieces from Day 1 & Day 2 that summarized key points from various presentations and panel discussions. They also profiled Josh Clark's keynote talk and the conference campaign (designed by Overdrive) in an Eyes on Design piece.

Michael Emory, President and CEO of Allied Properties REIT, and Stephen Alexander, founder of Cumbrae's, were also in the news for being RGD's DesignThinkers of the Year. Canadian Interiors, DesignEdge, RENX.ca, The Toronto Star, BizNow and Building.ca shared their contributions to the design industry. More coverage is expected to come from the Toronto Star and Rotman Management.

RGD was pleased to receive pre-conference promotion from:

A week prior to the start of the conference, AZURE created excitement by naming the top 3 talks to look out for this year. Sebastian Padilla, Christopher Simmons and Paddy Harrington RGD made the list, with some background information on what their talks would include.

We also thank the following organizations who helped spread the word about DesignThinkers to their respective audiences:

More press coverage for our DT speakers is expected over the next few weeks, including another video from CBC Arts on how Expo 67 influenced Karim Rashid's career, and articles on Annie Atkins and Coralie Bickford-Smith in the Toronto Star.