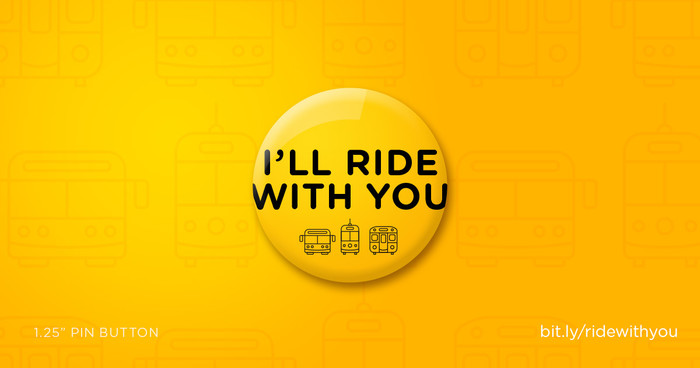 'I'll Ride with You' button created by Umar Shahzad RGD in response to the backlash that the Muslim community has been facing in cities worldwide in the aftermath of the Paris terrorist attacks.

Jean-Pierre Lacroix RGD, President of Shikatani Lacroix, presented at the User Friendly Conference 2015 in Shenzhen, China on the topic 'Is Your Brand Experience Ready for the 5th Dimension?'

Louis Lapointe RGD was involved in developing the Social Media and Administration Specialist program at Champlain College in Montreal. Launching in August 2016, the three-year technical program will prepare students to apply social media skills to a business context and will be the first social media focused management program to be offered in the Province of Québec.

Greg Neely RGD, President at Forge Media + Design shared a presentation on sustainable wayfinding at the ASCC Conference for building a sustainable future in the college sector.

Carey George RGD and the team at Goods & Services received three Merit awards from the HOW International Design Awards for Nicholas and Krampus Wines, Flash Reproductions' Mulled Wine and for the digital version of Wayward Arts Magazine.

Ben Hagon RGD and the team at INTENT awarded Best Marketing Campaign at the Cambridge Chamber of Commerce annual awards for the #SheDeservesIt campaign for Women Crisis Services of Waterloo Region.

Ric Riordon RGD, Shirley Riordon RGD and the team at Riordon Design were awarded Silver in the Self-Promotion Category of the W3 Awards for their company website, riordondesign.com.

Marko Zonta RGD and the team at Zync received the Silver Award at the Transform Awards for the Canadian Olympic Committee website.

Issue 20 of Wayward Arts, created by Flash Reproductions and designed by Vanessa Eckstein RGD and the team at Blok Design, was named Magazine of the Week by Mag Culture.

Designedge Canada announced the finalists of the special Legacy edition of the Canadian Regional Design Awards ('The Redgees'), including the following Members of RGD:

Congratulations to the following Members of RGD who were recently recognized at the Ontario Association of Art Galleries (OAAG) Annual Awards:

Gilbert Li RGD, The Office of Gilbert Li received an Art Publication Award for Kelly Mark: Everything is Interesting and a Design Award for Jean-Michel Basquiat: Now’s the Time

Ben Hagon RGD and the team at INTENT shared the 'Accessibility Matters' project for Wilfred Laurier University, a new branding project for Banyan Community Services and other updates in the latest Good News newsletter.