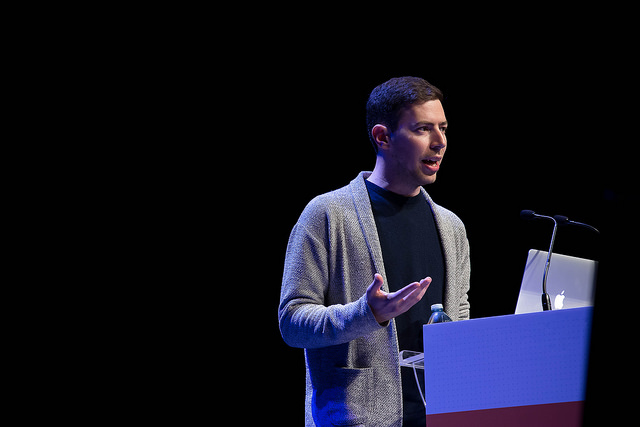 Journalist Ryan Bigge reflects on some defining moments of his DesignThinkers Conference experiences.

I attended my first DesignThinkers conference last year, and on the final page of my Moleskine I wrote the phrase SIDE PROJECT in large block letters. Why? Probably because I heard Andrew Zolty explain how creating Baker Tweet in his spare time eventually led to forming his own company. And because Jessica Walsh talked about parlaying her 40 Days of Dating experiment into a movie deal. So when Jessica concluded her talk by saying, “pay attention to what you like to do when you’re not being paid” the words SIDE PROJECT appeared in my notebook without much effort.

The through line for this year’s DesignThinkers didn’t emerge quite as easily. But maybe that’s because this year’s theme wasn’t as easy to discuss: the uses and abuses of design.

Diana Uppman was brave enough to discuss the identity-crisis that BVD Stockholm experienced when it turned 16. Referring to BVD as a moody teenager, Diana talked about how simplifying the 7-11 brand was invigorating, until she noticed all her redesigned coffee cups littering the streets. This guilt encouraged her to switch from tweaking logos to improving society through better bike lanes and simplified child insurance. Frank Chimero, meanwhile, talked about shooting wolves versus protecting bears as a way to understand the short-sighted bravado of Silicon Valley solutions.

And then there was punky Art Chantry, the enfant terrible (unfont terrible?) of the conference. Obstinate about technology, proud to still use blades and wax, Art was the main reason I wanted to attend this year. He did not disappoint. Speaking as loudly and boldly as his design work, he explained how his mental and physical health improved after he stopped working for assholes. He also boasted about turning down five separate job offers to be art director at Microsoft, eliciting a small gasp of jealous disbelief from a 20-something designer sitting in front of me.

Still, trying to impose a tidy theme across two days of diverse speakers is always a bit dangerous. What I can say with confidence is that DesignThinkers excels at telling you something you didn’t already know. The current pinnacle of user experience is surprise and delight, and I’d argue the same holds true for conference experience.

Over a year later, I can still recall Ellen Lupton’s hilarious pantomime of the theatrical elements of ordering a burrito at Chipotle. My bursts of surprise and delight from this year include Emilie Baltz’s combination of design, performance and food in projects like an ice cream cone orchestra and cotton candy Theremin. And Adam Antoszek-Rallo RGD showing us how the best website design stops being seamless and invisible when the HTML behind it isn’t built with accessibility in mind. And product designer Christina Beard cramming 90 minutes of insight into 30 as she shared the results of her research about designers who have made the transition from consulting to in–house.

But a successful conference is about far more than putting smart people on stages. It’s also about avoiding things that don’t work, like too many panel discussions. (I blame SXSWi for ruining this particular format). I’m happy to report that DesignThinkers continues to offer very few panels.

Based on this year’s conference, I also think that the confessional talk trend is starting to wane. Which might be a good thing. Yes, a strong aspect of autobiography can make a talk more relatable, the spoken equivalent of a Medium article. But it’s easy to confuse process transparency (the behind-the-scenes mechanics of successful design) with personal transparency (the emotions and the ego of design).

A little self-reflection goes a long way, and speakers like Emilie Baltz seem to agree. She managed to condense her seminal childhood influences into a single slide: a package of Twinkies inside a picture frame. That might sound a little goofy, but it worked. Really. Although I guess you kinda had to be there.

I’m very glad I was. I hope you were too.

Ryan Bigge is a content strategist, cultural journalist and creative technologist. In 2013 he spoke about creating great analog souvenirs for a digital era at SXSW interactive. He also plays guitar in SubPox, a 90s cover band.