Why is Amanda Colvin an RGD? 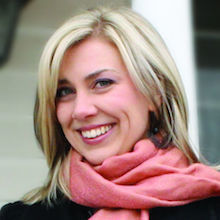 Owner/Creative Director of Melontree Studios, shares her experience getting involved with RGD and taking advantage of the many benefits of membership.

In my thirteen years of professional design practice, I have encountered many peers who see no value in becoming or remaining members of the RGD. To them, I usually say, "You can have a top of the line power tool in your closet, but if you never dust it off and use it, it’s never going to do anything for you!"

My experience as an active member of RGD has been nothing but positive, and I can identify several examples of how the Association has helped me be a more competent, professional, connected and successful designer.

Getting involved pays dividends
After being a fairly passive student member of the organization, my desire to become more involved led me to join the RGD Provisional Committee. Within this productive group of blossoming designers, I got up close and personal with the inner workings of RGD. It was inspiring to see the hard work that went into building the organization and the consistent effort to do more every day for their members.

I regularly saw the staff going above and beyond the call to make sure each member knew that RGD had their back. My time in the provisional committee was spent developing new literature for members, which was an educational experience that pushed me to keep growing. We also saw a need to support candidates for accreditation as they prepared for the RGD Exam, so we piloted the first RGD Exam study group, which proved very successful, and has helped hundreds of new designers since.

In 2007 I started my own business and found myself referring to the RGD Handbook many times as a source of information on how to write a contract, produce a quotation for work and submit invoices. In the first year of business, I also realized my taxes were going to get more complicated and my run-of-the-mill accountant wasn’t abreast of the (then current) issue of PST and when to charge it as a designer. I got in touch with RGD and asked if they could recommend anyone with the skills required to keep me out of audit. Right away, they suggested I contact Christoph Treptau, who had spoken in RGD seminars and webinars about taxation for employees and business owners in the creative industries. Since switching to Mr. Treptau I have never again worried about tax time.

Another big question I wrestled with when going into business was “what do I charge?” RGD’s annual CreativeEarners Salary Survey is an invaluable resource for answering this very question! As a self-employed designer, I use it to gauge the market for my work at my current level of experience, geographical location and skill set. By basing my fees on the averages listed in the survey results, I can say to clients with confidence that my rate is fair and reflective of my services.

In the first year of business I also took RGD up on an offer to use a portfolio display table at the DesignThinkers Conference. While there, I was approached by an art director at a marketing agency who was looking to expand her list of freelance designers. We met again after the conference and negotiated a long-term working relationship that provided a large portion of my annual income for several years to follow.

Becoming a mentor: untold benefits
After a few years in business, I took on a student protegé, Marlaine, through the RGD’s Mentorship Program. We met for several conversations over coffee to discuss her portfolio, her experiences as a student and her questions about the design industry. From there she became my intern as part of her last year of study, which was a great opportunity for both of us. Because we worked so well together, we ended up forming a lasting and mutually beneficial working relationship. She started her own business after graduation, and I have been outsourcing overflow work to her ever since. Recently I became a mother, and Marlaine was able to take over for me in those first critical months, giving me the time and space I needed to focus on my baby.

Conference participation: taking the industry’s pulse
At RGD’s invitation, I have participated in two Creative Directions conferences as a portfolio reviewer and panelist. Giving back to the community is a fulfilling experience and certainly part of the reason I participate. I also find that keeping an eye on what the design schools are teaching is critical, as they are producing the next wave of professionals in our field. Soon enough we will be competing for work in the same arena, and it’s nice to know what comparisons will be made by prospective clients.

Spec Work: it’s all about education
And of course there’s the matter of spec work. Spec work has many faces and disguises. Almost never is it actually called ‘spec work’ by the people who are requesting it. I have found that 95% of the time clients have no idea that their request is the subject of heated debate in the design and marketing community, but I believe a little education can go a long way. Explaining the reason why designers are rejecting spec work is so much easier with RGD’s online resources at my disposal. Being prepared for the myriad of scenarios where spec work can rear its ugly head, and knowing I have RGD's support gives me the confidence to navigate those difficult conversations, often coming out on the other side with a better-educated client who is happy to pay.

Still learning and growing
A recent encounter with a gap in design business knowledge had me back on the phone with RGD. I was contacted by the Canadian History Museum with a request to license some of my work for a permanent gallery display in commemoration of Canada’s 150th anniversary. This was very flattering, but I had absolutely no idea how to charge licensing fees, or if fees were even appropriate in such a scenario. RGD responded to my inquiry immediately by putting me in touch with two different Association members who worked at museums in Canada. They pointed me in the direction of CARFAC (Canadian Artists’ Representation/Le Front des artistes canadiens), a fabulous organization that provides literature to Canadian artists about copyright law and defends their right to be paid for their work (not unlike the RGD!). They also have an online licensing fee calculation tool, which proved to be just what I needed. I prepared a quote based on the CARFAC fee guidelines and, as I was clearly speaking ‘museum language’, it was immediately approved. I can now proudly say that as of July 2017, my work will be on permanent display in the Canadian Museum of History! Thanks RGD!

As you can see, I am a fan of RGD. It’s easy to dismiss the organization as useless when you have never tested its mettle. But my challenge to the skeptics is: get a membership. Spend a year being an active member of the organization. Assess the outcomes, and then decide if it’s right for you.