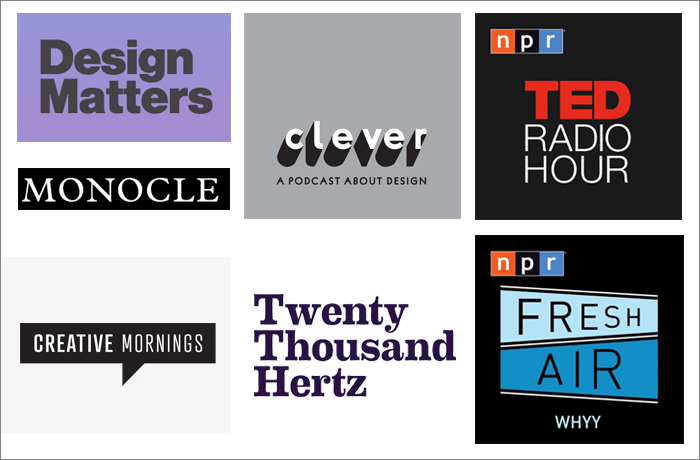 Looking for a way to stay connected with the creative community while you commute? These 9 podcasts are full of informative, inspiring and fun dialogue about the design industry and creative processes.

Design Matters with Debbie Millman
Debbie’s been hosting this podcast for 11 years now (!) and the show calls itself the “world’s first podcast about design.” However, the show isn’t just about design, Debbie chats with all kinds of creators about their process, path, and general thoughts on their little niche of the industry.

Monocle’s The Stack
I’m a sucker for print, specifically magazines and newspapers, so Monocle’s take on the industry is a great weekly update from around the world. The best part is they don’t discriminate, they cover everything from shiny fashion magazines to small independent publications.

TED Radio Hour
Insights on astonishing inventions, fresh approaches to old problems, new ways to think and create. If you’re looking for enlightenment, surprise, and a little humanity, TED’s weekly, themed collections of their best speakers (complete with bonus interviews by host, Guy Raz) is a good place to start.

99% Invisible
Host Roman Mars digs into all of the thinking that goes into the things we don’t think about. It really does shed light on the unseen, or overlooked, aspects of design and architecture around the world.

Host Dallas Taylor delves into sound design - those sounds that make television, film, and games sound insanely cool. Whether it's a high-profile ad or trailer, an independent documentary, or something in between, Taylor's team at Defacto brings thought, style, and experience to all of their projects.

A show about life through the lens of advertising. Host Terry O'Reilly explores why we make the shopping decisions we make, and how we are influenced by words, colours and images. He tells stories of the remarkable creativity found at the higher realms of marketing, and analyzes the ads we love to hate.

Hosts/Designers Amy Devers and Jaime Derringer have candid and revealing conversations with designers because relating to the humans responsible for the objects and environments that shape our lives can result in a more meaningful connection to the built world.

In 2008, Tina Roth Eisenberg started CreativeMornings out of a desire for an ongoing, accessible event for New York’s creative community. The growing archive of past breakfast includes design legends to hometown heroes, speakers are selected by each chapter based on a global theme.

Fresh Air
Terry Gross, the host, is one of the best interviewers of our time. The show features intimated interviews with guests about contemporary arts, culture, and world issues. It's not design-centric, by any means, but I'm a big believer that understanding people is a big part of being a smart designer.

Thank you to those who contributed to this list: Nicola Hamilton RGD, Jay Wall RGD, Chelsea Marzean & Brigitte May