Volunteer of the Month for April 2018 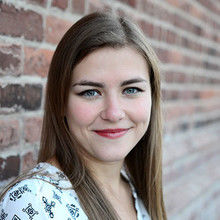 RGD thanks Ethics Committee Member Evelyn Csiszar RGD for her contributions to our community.

Evelyn is the founder and lead UX/UI designer at Collective Experience. She completed her Bachelor’s Degree in Design from the York University/Sheridan College Design Program in 2010 and has studied and practiced user experience design extensively throughout her career. Evelyn has had the pleasure of working on projects for organizations like University of Toronto, BMO, HydroOne, CCRM, Futurpreneur, HEQCO, CNIB and the Ontario Science Centre.
Q: How long have you been volunteering with RGD, and in what capacity?

I’ve been volunteering with RGD for about four years now. I initially joined a Committee to meet other designers and get more involved with the design community. Over the years I’ve participated in a number of events and initiatives, from public speaking engagements to portfolio reviews to running study groups. Currently I serve on the Ethics Committee where we’re fortunate to have the chance to discuss and debate the often-blurry lines of professional conduct in the design industry and help shape the industry standards we hold ourselves accountable to – which is very exciting!

Q: What made you want to get involved with RGD?

I had been working full-time at a small design studio with only one or two other designers and I missed having a larger design community similar to the close-knit environment of my university days in the York/Sheridan Design program. I wanted to connect with other like-minded designers who were not only passionate about design but could also relate to my own experiences, frustrations and challenges. At the time, I didn’t quite know what I wanted to get out of RGD, but I think in hindsight, what I was really looking for was a support network of people I could really relate to and connect with.

Q: Of the RGD initiatives you have contributed to, what are you most proud of?

When I was volunteering on the Provisional Committee, we came up with the idea to organize Design Socials to bring together designers in a setting that would help reduce the intimidating barriers between junior designers and seasoned veterans. We decided to feature guest speakers and provide an atmosphere for intimate conversations, so young designers can really connect and learn from the influential designers who help shape the city’s creative landscape. This was one of the first initiatives I was involved in, and it’s still running, now called RGD’s Designers + Drinks + Discussions, which are held in multiple cities and continue to be a success.

I’ve personally been inspired by the guest speakers many times over and can largely attribute my decision to go freelance to an inspirational conversation I had with one of the speakers who encouraged me to make a decision that significantly shaped the direction of my design career. I’ve also made lasting connections and friendships through these events, and I hope that others have as well. Things really came full circle when I was asked to be one of the featured guests at this event a few months ago. This allowed me to share my own experiences and hopefully helped inspire others the way former speakers had inspired me.

Q: What is your most memorable experience as an RGD volunteer?

I fondly remember the early days of my volunteering when our Provisional Committee meetings would take place at the RGD office. I always looked forward to coming out to these and found the group really fun to work with. It felt like we were a group of forward thinkers who had banded together to help bring positive change into the world. There was a lot of camaraderie and we passionately worked towards a purpose.

Q: What have you gained from being an RGD volunteer, and why would you recommend it to other members who might be thinking of getting involved?

I’ve made many invaluable connections and friendships by being involved with RGD. I was able to become an active member of the community and not only learn and grow from the experience, but I also have the chance to now help others do the same. It’s really rewarding to be involved in pioneering new initiatives that have lasting impact. I’m grateful for the opportunities RGD provides in shaping our design community and it’s inspiring to know that our efforts will help future designers as they enter the complex and ever-changing world of design.

Interested in getting involved with RGD? Fill out our online form.