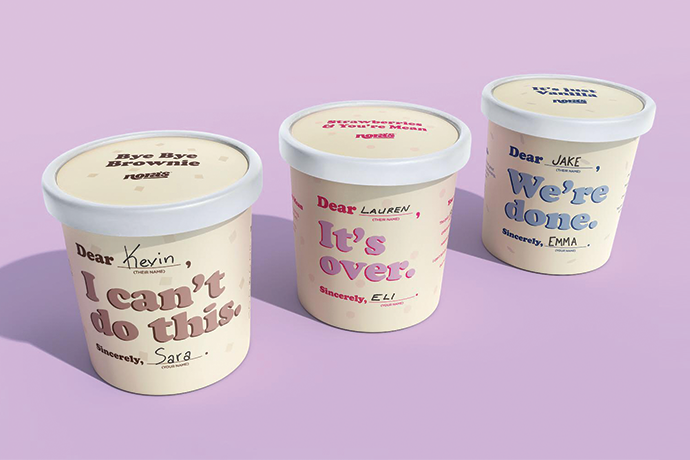 Everyone knows that ice cream makes break-ups a little easier to swallow. So Rethink Canada teamed up with Nora’s, a plant-based ice cream, to release three limited edition pints for commitment-shy individuals who are looking to end a relationship on a sweeter note.

To commemorate the anniversary, Zulu Alpha Kilo proposed launching a beer that remembered the unifying virtues of a rock legend. Amidst the political tension of 2018, it was the perfect time to launch the Remember IIPA. To promote it, we developed packaging, coasters, apparel and posters that were hand-stained with the actual Remember IIPA .

These coasters were created for a select group of brave clients who have ventured with us through uncharted territory over the past year. Each individual coaster is unique and together (40 in total) form the 540km of the Nahanni River.

A dead body crops up beneath the royal kale beds at Kensington Palace! I worked with the illustrator Hsiao-Ron Cheng to incorporate mystery cues into a royal china pattern. With the addition of spilt tea - you know something is just not quite right at the royal palace.
Design de Plume created a logo for The NWAC 2SLGBTQ+ Unit.

The NWAC 2SLGBTQ+ Unit logo was inspired by a story shared by Ryan Young, a Two Spirit Ojibway artist & a creator of the Two Spirit Blanket. The story describes why the crow is black which reflects the struggles which Two Spirit people have faced. Learn more about this inspiring story here.
Edmund Li RGD and Udo Schliemann RGD created the "Colours and Patterns in Motion” public art installation as part of the 2019 DesignTO Festival.

In today’s digital world, people expect all images to move and be interactive. Our installation put a spin on this expectation by creating a series of changing patterns using a century-old analog technology called kinegram. A set of solid parallel lines, unlocks the static imagery and surprises the audience with motion.
The Studio Wyse team just wrapped their fourth issue of Ryerson University Magazine. The publication works to connect alumni, donors, staff, and students to the inspiring stories coming out of the school.