Volunteer of the Month for February 2020 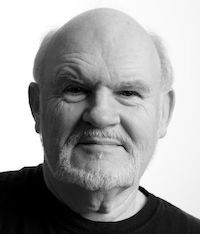 Acclaimed lettering artist and typeface designer Rod McDonald reflects on his history with RGD and how the organization continues to support the design industry today.

Q: Based on your experience volunteering with RGD, how would you describe the role of the organization in the industry?

As a long-time Member, it occurred to me recently that I can now see three very distinct phases to being an RGD Member. In the beginning stage RGD provides a wonderful way to meet other designers as well as to understand the design world and how it really works. Some of the people you meet at this stage will become life-long friends and colleagues. You’re attending, or at least trying to attend, every conference announced. You’re also reading every book or article you can get your hands on to learn how things work – especially how they work for you.

The second phase is the one we tend to focus on most; what could be called the middle age of your career. That is the time when you are the busiest. Busy earning enough money to stay afloat as well as trying to keep ahead of changing technologies and social mores. You may even find yourself running a studio with many employees. There is a good chance that you are now speaking at those conferences you were once so thrilled to be attending. You also discover that you’re so busy you often find it hard to stay on top of things.

The third phase is what I call the pay-off stage. The pay-off may include financial rewards, but what I think is more important, assuming you’ve made it this far, is seeing what you have done with your life and what contributions you have made, or are making, to others. We usually think of this stage has the time when we can teach people how to do things. But by now you should also be able to see some of the mistakes you’ve made and can warn people not to do some of the things you did. Your pay-off becomes a kind of pay-back.

RGD provides support, knowledge and community. When you reach the stage where you can look back you realize just how important those three tools are. While it’s true that we’re each responsible for our own success or failure, I do not know a single person who has accomplished anything who has done it entirely by themselves.

Rod's career began in the early ’70s as a lettering artist working for Toronto ad agencies and design studios. He created alphabets and photo-fonts for headline setting and phototypesetters. One of the first lettering artists to switch to the Mac, he soon began producing typefaces and logos for leading Canadian magazines, including Applied Arts, Maclean’s and Toronto Life. Rod also developed many corporate and custom typefaces.

Interested in getting involved with RGD? Fill out our online form.