The Regional Municipality of York 'I Count' Homeless Enumeration Campaign 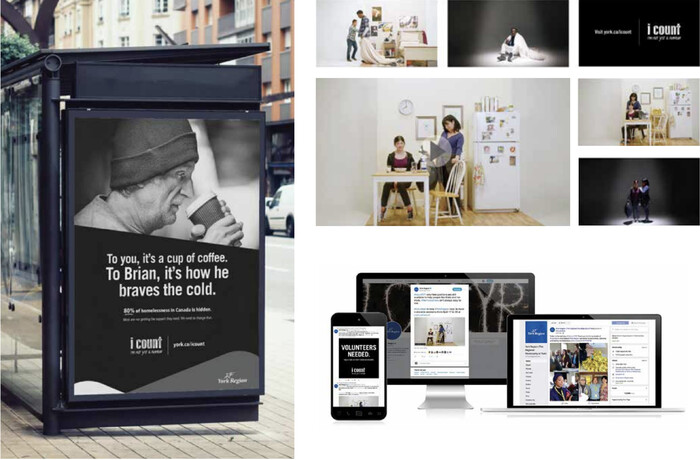 The campaign required three promotional streams: one aimed at encouraging participation, one for recruiting citizen volunteers and one aimed at increasing awareness of what homelessness looks like in York Region. Each component was approached separately to target relevant audiences and tied together with a common look and feel. The campaign reached more than 75,000 people on social media with messages of homeless awareness. Videos depicting stories of homelessness in York Region were viewed over 116,000 times.

"This project is highly empathetic and a great example of human-centered design around a deeply stigmatized and challenging issue. Bravo to the team for avoiding the ‘one size fits all’ solution for addressing each of the stakeholders. Each video was gripping and, though dramatized, felt authentic and impactful in its intensity and simplicity."

"What an incredible cause and effort. I chose this project for the creativity of the message and the way it captures the reality of homelessness. Simply beautiful."