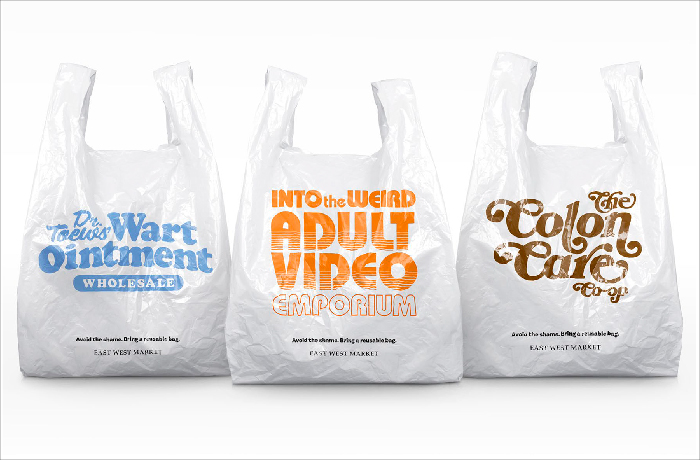 East West Market, a Vancouver grocery store known for organic food and sustainable initiatives, commissioned Rethink to redesign their plastic bags to help customers remember reusable bags. Rethink leveraged the shame already attached to carrying plastic bags by redesigning East West’s bags to make them look like they came from other, more embarrassing stores like ‘Dr. Toews’ Wart Ointment Wholesale’, ‘The Colon Care Co-op’ or ‘Into the Weird Adult Video Emporium’. The plastic bags acted as a take-home reminder to bring a reusable bag next time. The story was picked up by national and international publications and the idea was championed by celebrities including Kevin Bacon, Stephen Fry, Jessica Hische and George Takei.

In a nutshell — simple, clever, effective and well executed! Plastic bags have been a huge culprit in the pollution of our oceans and lands and while there have been many initiatives to ban or limit their use it often comes down to the choice and actions of the individual customer. This cheeky campaign tackles the problem with a very clever solution, forcing the customer to second guess whether they really want to take one. In a world where designers are usually tasked with creating desire, this campaign does a brilliant job of promoting the opposite and with just the right touch. It’s a great insight and a brilliantly-executed campaign, deservedly generating considerable media attention and buzz for the cause and its brave client. Ironically, it now actually makes me want one of those bags.