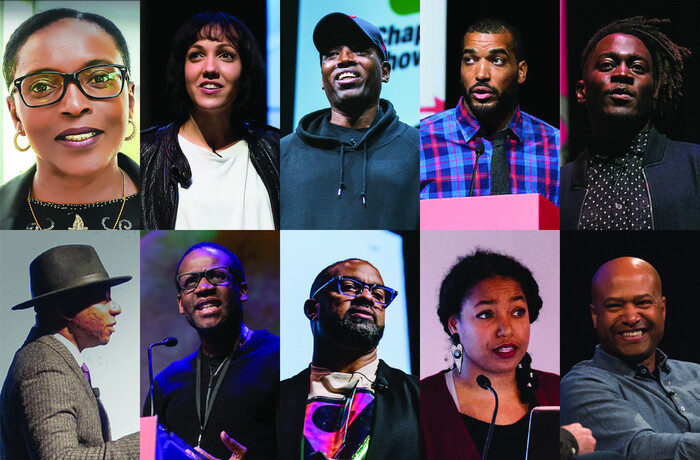 In celebration of Black History Month, the RGD is sharing stand-out DesignThinkers presentations by Black industry leaders and creatives for the entire month.

With over 30 years of experience in the design industry, Angela is the Co-Founder and Strategic Director of TransformExp, an award-winning design firm with clients like BBC Television, BC Liquor Stores, Swatch Canada and The Ritz-Carlton. She has also spent many years designing for social change, including the Free Nelson Mandela Campaign and the first World Aid Day concert. As an Educator, Angela has been nominated for seven local and national teaching awards of excellence in Canada and has won Teaching Excellence Award at BCIT. She has also developed several creative industry career events with the British Columbia Institute of Technology Student Association and has organized events to participate in Vancouver Design Week, as well as, her very own BainsExtraBold UK TYPE TOUR 2018

In this talk, Angela goes deep and real into her design journey. Are you listening, questioning, inquiring or self-reflecting about the design industry and its struggle with diversity? If so, you will walk away from Angela's talk with a fuller understanding of this ongoing struggle.

Ashleigh is an international speaker, strategic creative and an advocate for design's ability to break barriers and create positive social and cultural change. She is the Chief Experience Officer and a Partner at Coforma (formerly &Partners), a digital consultancy and design studio and a chair of the national board of directors for AIGA. In the past, Ashleigh served as the creative director and a digital strategist for the Obama White House, bridging two presidential terms in the Office of Digital Strategy. She was named one of GDUSA’s People to Watch, featured in Essence Magazine as one of the 29 most powerful black women in the Obama administration and received the DCFemTech Award for being a powerful woman designer.
In this talk, Ashleigh shows-and-tells how her small design team transformed daunting challenges into successful digital campaigns as part of the Obama administration.

DesignThinkers 2019
Cey emerged from the downtown graffiti movement to exhibit alongside artists Jean-Michel Basquiat and Keith Haring. Currently working as a freelance Creative Director out of New York City, he served as Creative Director for Def Jam Recordings, where he co-founded the label’s in-house design firm, creating identities, album covers, logos and campaigns for Run DMC, Beastie Boys, LL Cool J, Notorious B.I.G., Maroon 5, Jay-Z and more. He co-authored DEFinition: The Art and Design of Hip-Hop and designed the book Def Jam Recordings: The First 25 Years of the Last Great Record Label.
In this talk, Cey explores the evolution of hip-hop as a visual phenomenon and shares his approach for interpreting pop culture, community issues, race and gender relations through his work.

Print in the Digital Age

DesignThinkers 2013
Darhil is the Creative Director at Apple Inc. Formerly Creative Director of The Atlantic, he oversaw the art direction of the magazine across print, online and on mobile and tablet devices. His work has graced the covers of some the world’s most popular magazines, including Esquire, Ebony and The Source.
In this talk, Darhil discusses the process of redesigning the magazine as well as the challenges and opportunities for a media brand to design a sustainable business model that supports storytelling.

Talk: The Artful Designer: Creating for Commerce and Culture

DesignThinkers 2019
Designer and Principal at Nuff, David designs brand identities, apps, interactive installations and murals. His commercial clients include the Royal Conservatory, Nestlé and the Museum of Jewish Montreal. His artistic practice has produced work for Ontario Place, Museum of Contemporary Art Toronto, Ontario Science Centre and Artist Project. He lives in Toronto with thirty-one houseplants.
With one foot in both the art and design worlds, in this talk David shares his experiences from across the divide and through recent projects.

Talk: From Insights to Executions: Creative Strategy & the Business of Design

DesignThinkers 2017
Douglas enjoys being one of the voices in front and behind a concept, marketing plan or digital strategy. His approach to creativity combines right-brained creative problem-solving with left-brained strategic thinking. In 2011, Douglas founded The Davis Group LLC and continues to offer strategic solutions to branding, digital and design problems. Douglas is also a faculty member in the Communication Design department at New York City College of Technology, on the graduate level in the Branding and Integrated Communications program at The City College of New York and digitally as a HOW Design University course contributor. His HOW Design University class, Creative Strategy and the Business of Design, was published as a book in 2016.
In this talk, Douglas demonstrates simple creative tactics that will help you turn research into insights and turn insights into a variety of creative business solutions.

DesignThinkers 2016
Eddie began his career as a designer at ATG and Imaginary Forces and worked as Art Director at 2x4 before establishing his own studio, The Map Office, in 2005. He joined Pentagram’s New York office as partner in 2010. Eddie’s work has included the design of brand identity, publications, packaging, environments, exhibitions, interactive installations, websites, user interfaces and software, with many of his projects ranging across multiple media. His work is in the permanent collection of the MoMA and has appeared in publications such as Wired, Fast Company and Creative Review. Eddie is a senior critic at Yale University and has taught at the Rhode Island School of Design, the Columbia University School of Architecture and University of the Arts, Philadelphia. He recently authored a book, Color Works, published by Rockport. He was named one of Fast Company’s 100 Most Creative People in Business in 2012 and 2014 and was featured on Ebony Magazine’s Power 100 list.
In this talk, Eddie shares how to push the boundaries of design thinking when conservatism appears to be on the rise in all of our cultural arenas.

Forest is Head of Design & Global Principal at Wolff Olins, leading design initiatives for the world’s most influential companies. He is also a critic in graphic design at the Yale School of Art. Prior to joining Wolff Olins, he was the Executive Creative Director at West, leading design across a portfolio of early-stage companies alongside Allison Johnson. He recently served on the Board of Directors for AIGA NY and is currently teaching one of CCA's inaugural courses — Future Design. His work has been exhibited at MoMA, the Royal Ontario Museum and at numerous international biennials. He is the recipient of design accolades including the Cannes Gold Design Lion and the ADC Black Cube.

In this talk, Forest explains the topic of future design through diverse sources — combining theoretical texts with pop-cultural artifacts, images and film.

Jessica is an award-winning international speaker, workshop facilitator, motion infographic designer and research analyst. She and her colleague Josh Poe are the founders of the Root Cause Research Center which is a grassroots-led institution that collects data, creates data visuals and trains impacted community members in research and data storytelling. She has been featured in: Communication Arts, Thrive Global, Forbes, The Great Discontent, Creative Mornings, Project 1324 (Facebook mobile experience), Slack Blog, Create Magazine, The Dieline, Revision Path, etc.

In this talk, Jessica explores principles of conscious and responsible design from real-world infographic projects.

As the global head of design at Fiat Chrysler Automobiles (FCA), Ralph Gilles oversees design for the company's iconic brands - Chrysler, Dodge, Jeep®, Ram Trucks, Alfa Romeo and Maserati. Since joining Chrysler in 1992, he has served as Senior Vice President - Product Design and President and CEO - Motorsports, FCA - North America; President and CEO - SRT Brand; and President and CEO - Dodge brand for FCA US LLC. Ralph has been sketching cars since he was 7 years old. He draws design inspiration from pop culture and experiences from traveling the world. Ralph believes that ensuring a vehicle has a soul is the key to great design.