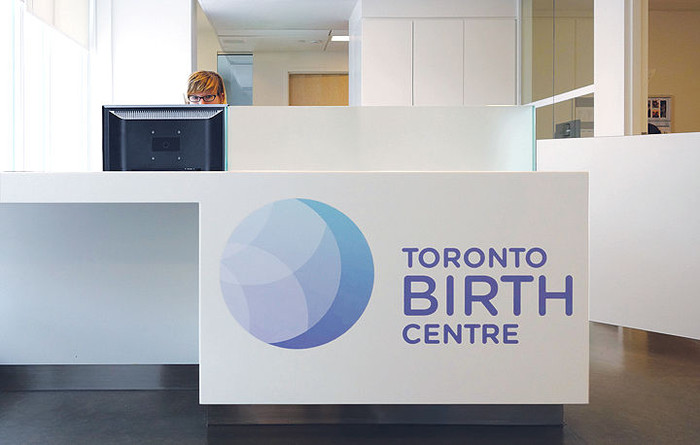 The project included the branding, environmental graphics and signage and wayfinding for the Toronto Birth Centre (TBC), one of two pilot demonstration birth centres in Ontario. The TBC is an exciting partnership between the Ministry of Health and Long Term Care, Seventh Generation Midwives Toronto and Women’s College Hospital. As a not-for-profit corporation using an Indigenous framework, TBC aims to create a welcoming and culturally safe space for families of all nations to give birth. Providing a comfortable, home-like setting, TBC is midwife-led and was planned and designed in collaboration with midwives. The Toronto Birth Centre is used by Aboriginal and non-Aboriginal women and their families as an alternative to hospital birthing.

We were recommended to the client by Janna Levitt and Danny Bartman, of the talented architectural firm LGA Architectural Partners, with whom I have a long-standing working relationship. They frequently create projects for non-profit organizations and they are renowned for their strong and memorable design solutions, even when working within limited budgets.

The project commenced in June 2013 and was substantially completed by February 2014. The goals were to create branding that would reflect the sensibility of this unique centre and to integrate the environmental graphics and signage and wayfinding into the interior, which was designed by the architects to convey a non-institutional ambiance. 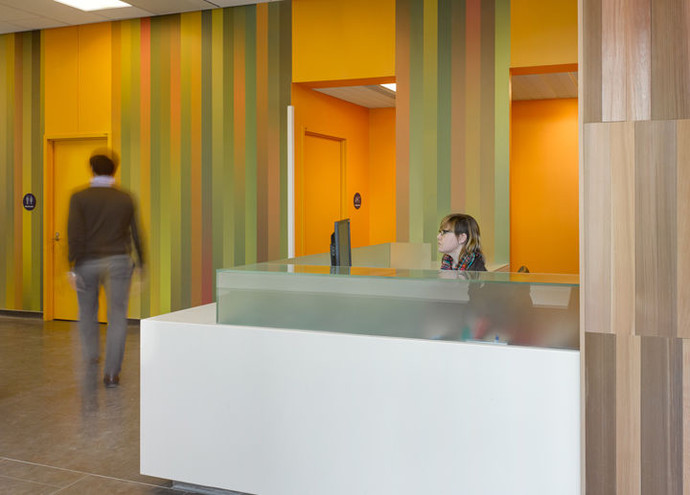 Sara Wolfe and Cheryllee Bourgeois, the principal client contacts, are intelligent and visually sophisticated women who had a clear idea of the Centre's vision. For the branding, they had originally worked with another designer but they were not satisfied with the resulting solution. The client liked the original concept: an image of the moon with its reflection and rings of water, but they were not happy with how everything came together in the design. They asked us if we would be willing to take another stab at designing the logo. We agreed to explore modifications to the original approach on the condition that we could also explore other options as well. We understood that the client owned the intellectual property for the original design before moving forward with the project.

Our intention was always to steer the client away from the idea of modifying the original design, as we felt strongly that this would not result in the resolution of its issues. Once they saw our concepts, they needed little convincing to move towards a new approach. The only commonality between the original and the final logo was that they both contained moons. How the moon was represented in the new logo, what additional symbology was reflected in the logo and the stylistic representation of the moon/logo bore no resemblance to the original.

Because the client had already been through the process once, they already felt they had an idea of where they wanted the logo to go, so it wasn't the lengthy process of investigation that one would normally go through. We researched birth centre logos, explored native imagery and worked with visuals collected from an in-house brainstorming session which used word association to explore different ideas.

We started with the word "family" and began building on descriptions and adjectives that captured the essence of how the birth centre wanted to be perceived. This was based on conversations with the client and our established understanding of the project. From there we researched and collected symbology, imagery and colours that represented those qualities, and generated combinations of those visuals to create logo concepts. We generated about 20 ideas/concepts, and narrowed it down.

Ten concepts were initially presented, followed by a second presentation that showed refinements of the client's top two choices and finally a third presentation with variations on the selected symbol. In the end, the client felt that the chosen logo had a contemporary urban sensibility that reflected the Centre, while subtly referencing aboriginal designs.

For the environmental graphics, we were invited by the architects to present concepts for a 100 metre graphic wall treatment for the main lobby and additional graphic privacy treatments for interior glass walls. The graphic wall was central to the Centre and would be instrumental in providing the visual focus for the lobby space. We presented two approaches, one utilizing a variety of graphic interpretations of birch trees and the second interpreting water, a significant element in the birthing process. In the end, the birch approach was chosen because of its significance to Native communities. 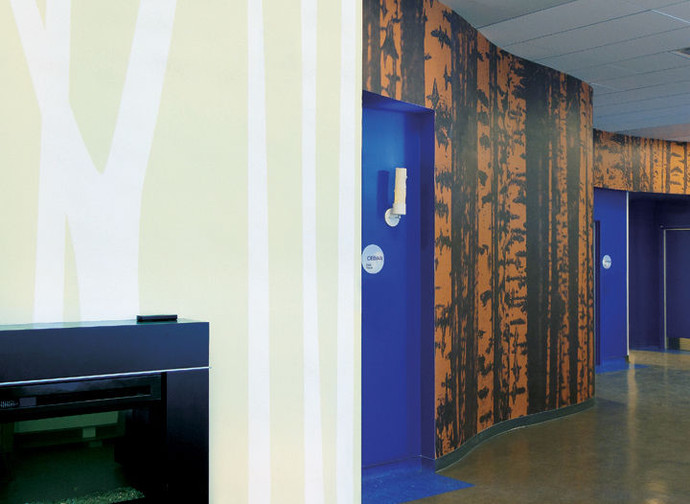 The birch tree is a recurring theme in other aspects of the Centre, including cast porcelain lighting and a 3Form birch twig feature wall. The environmental graphics took the form of large digital murals and frosted vinyl on glass depicting abstract, graphic and photographic interpretations of birch trunks. 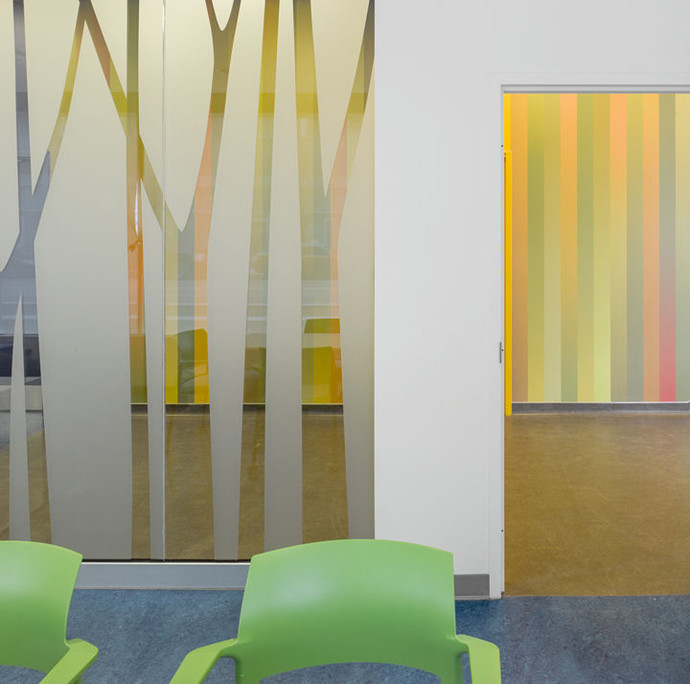 For the signage and wayfinding, we developed a single concept to present to the client which successfully extended the breadth of the new visual identity and provided a non-institutional sensibility that meshed with the interior design. 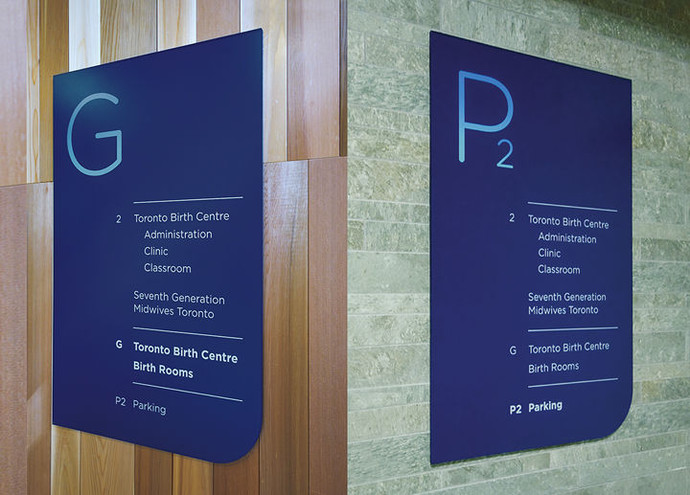 The client provided information in the project's early stages and responded to design concepts and proposals through presentations and interviews throughout the process.

The branding was a challenge in that we were aware that the branding had been attempted by another designer. At first we were concerned that this might be a case of a "difficult to please" client although it turned out to not be the case. We approached the project by first trying to understand what had gone wrong with the earlier design process and describing our investigation and development process to the client to get their buy-in before commencing work. From these discussions, we understood that we needed to move beyond the initial ideas and explore as many solid options as possible.

Another challenge was the limited budget for the project. To address this, we proposed vinyl signage applied directly to wall and cabinet surfaces for at least 1/2 of all signs in order to meet their target price. We also chose inexpensive sign materials for those that had to be created separately. 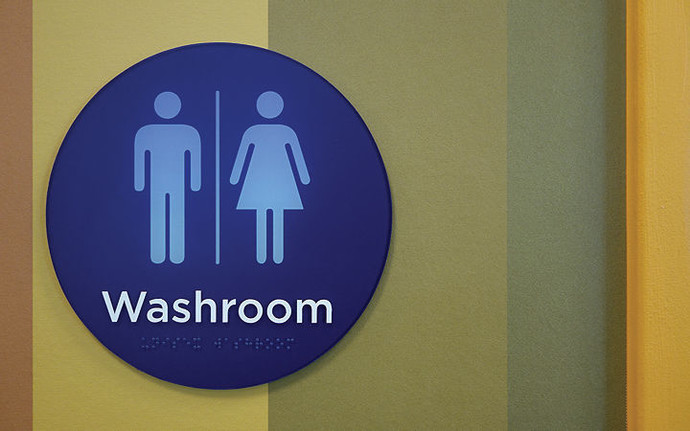 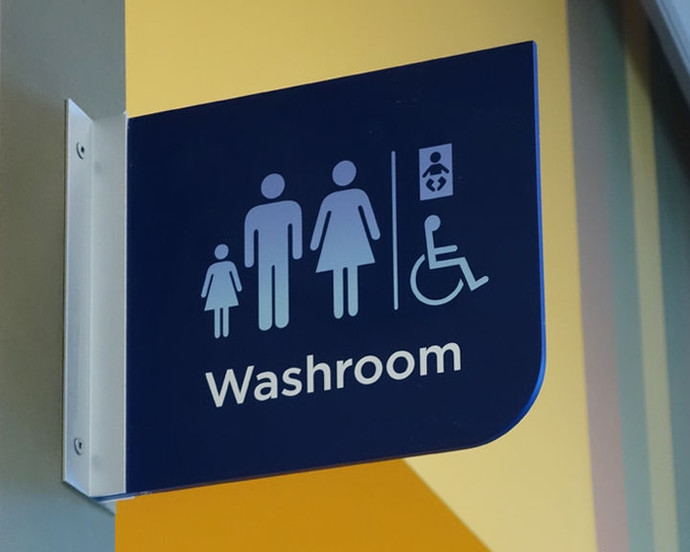 There was also very tight timing for the project as it started late and the work had to be completed under deadlines that were fixed by the government. We expressed our concerns about the timing from the outset and worked with the client to create a plan that included temporary vinyl signage on the exterior to identify the centre and laser prints that assisted the client in achieving occupancy. These placeholders assisted the client in achieving occupancy during the fabrication process, which can take several months.

At the time that we started this project, the AODA Final Proposed Accessible Built Environment Standard guidelines had been published and were undergoing review. Many of the guidelines we followed for the project were struck following its completion, but our design adhered to the initial, more stringent accessibility principles as much as budget would allow.

The branding is contemporary and serene. The signage is friendly, non-institutional and provides a strong but calming presence within the Centre with the use of cool blues and purples, gradients and curved shapes. The dark blue of the signs coordinates with the blue interior accent colour. For the font we used Gotham Round and Gotham, and we applied a gradient onto the large graphic sign elements to soften the imagery. The birth room signs were named after trees, using silhouettes of the leaves of each tree as a background element. The signage also provides clear messaging to clients who are often in stress upon arrival. The environmental graphics create personality within the main space, bold, colourful, the antithesis of clinical.

Together these elements create an enhanced perception of a "sense of place".  We have had positive feedback from senior staff members of the TBC, midwives and the architects. 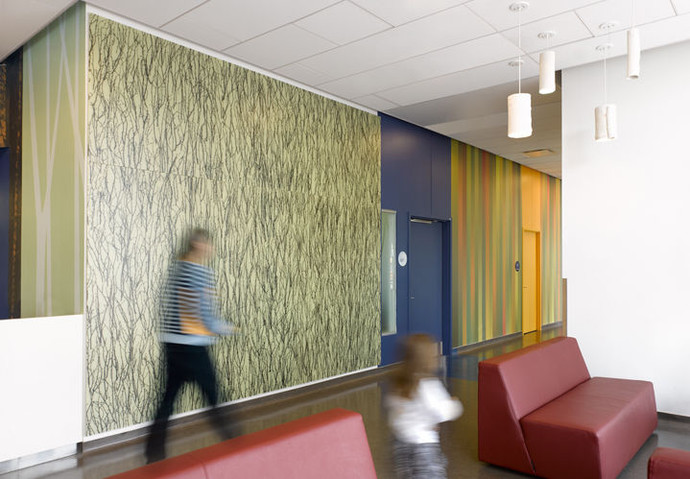