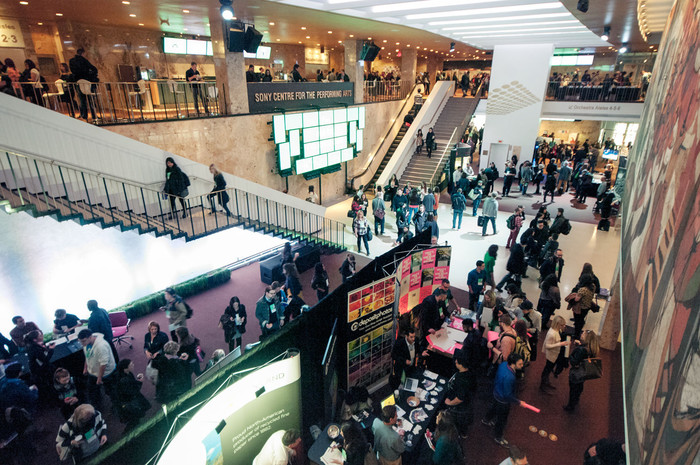 The Association of Registered Graphic Designers' 15th annual conference breaks records and keeps graphic designers ahead of the curve.

TORONTO, Nov. 12, 2014 – Hosted by the Association of Registered Graphic Designers (RGD), the DesignThinkers Conference is the largest annual gathering of creative communicators in the country. Held at the Sony Centre for the Performing Arts, this year’s event was record-breaking in both the number of attendees (over 1,800) and the international roster of delegates and speakers who came from the United States, Brazil, Germany, Turkey, Spain and the Netherlands.

Each year the conference pushes boundaries with a fresh theme created by a new design partner. This year’s wildly-successful ‘The Awakening’ campaign was designed by TAXI Canada with illustrations by Andrew Kolb. With 99 screens at The Sony Centre, the alien-themed campaign was rolled out throughout the venue.

One of the key themes that emerged at the conference was the concept of ‘play’ and its role in work and productivity. Delegates heard about the importance of experimenting and being open to failure. Explained Pentagram’s Paula Scher, “Making mistakes teaches you how you might achieve something.”

Richard Turley spoke about how some of his most eye-catching Bloomberg Businessweek covers were created: “Part of this was me becoming bored and looking for ways to make my work more interesting to myself”.

Sagmeister & Walsh’s Jessica Walsh ended the conference with her talk on ‘Creative Play’, explaining that “play isn’t one activity – it’s a state of mind, something that makes us feel alive”. She also advised, “you need to want to do what you’re doing before you can enter a state of play. If you don’t love your work, do something else”.

Another piece of advice bestowed by speakers was the need to find purpose in your work. Explained JWT’s Executive Creative Director Frederic Bonn: ”To connect with people, you need to create something that they care about – something entertaining, beautiful”. Willy Wong, Creative Director for New York City, hit the point home by saying, “all of us need to find purpose in our work and find a place where we can do what we love”.

One look at the conference speakers demonstrates that designers are continuing to transition into roles beyond the scope of design. Todd Waterbury worked in creative direction at Wieden+Kennedy and now resides over all marketing for Target. Richard Turley went from print design at Bloomberg to become the first VP of Visual Storytelling at media conglomerate MTV. Henry Hobson, titles designer for The Walking Dead and Sherlock Holmes, has begun the transition to film direction.

“We’ve seen a complete reimagining of what design is and what designers do,” explains RGD’s Executive Director Hilary Ashworth.

For the third year in a row, the conference hashtag #rgdDT trended across Canada on Twitter. Conference photos are available in a digital Flickr album. All presentations were recorded and access will be made available to RGD members and press upon request.

In the ever-changing design landscape, it will be interesting to see what themes emerge at DesignThinkers 2015 next November. Tickets for the conference go on sale in January, and press passes will be available.

Representing over 3,000 members, RGD is a hub for the community, promoting knowledge sharing, continuous learning, research, advocacy and mentorship.