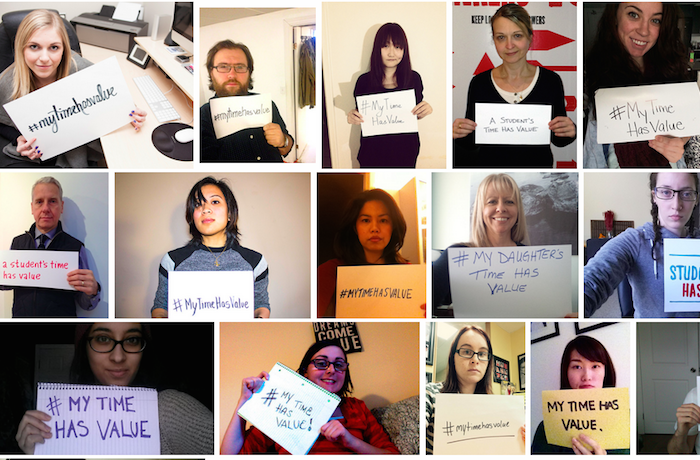 RGD Student Representatives are issuing a call to the creative community to speak out against speculative work by sharing the message 'My Time Has Value'.

Reacting to the Canadian government's logo contest for the 150th anniversary of Confederation, RGD Student Members are taking a stand against competitions such as this, which exploit students - and all designers - by asking them to spend time and effort creating work that, unless selected, will never be recognized or compensated for.

"Students are busy preparing for a future career in a world where they can be paid for the work that they do. Think about how important it is that potential clients, like the government, recognize that your worth as a designer needs to be compensated, so that you can make a living once you graduate," explain Sam Campbell and Daniela Luchetta, Co-Chairs of the RGD Student Rep Committee. "We hope to raise awareness of this exploitative practice and start a conversation about why we will not participate in a contest that undervalues the professional abilities of all designers."

Sam, Daniela and other members of the RGD Student Rep Committee have begun by sharing photos with the #MyTimeHasValue message on RGD's Flickr page, and are encouraging other students, professional designers and members of the creative community to do the same.

Show your support for this initiative in the following way:

Non-designers can also join the movement by sharing 'supporter' images stating 'My Daughter's Time Has Value' or 'My Brother's Time Has Value', filling in the blank with their connection to a graphic designer whose talent and hard work they support.

Join the movement and support the future of the design industry.

For more information on the #MyTimeHasValue initiative, email .

Click here for an updated overview of the initiative.