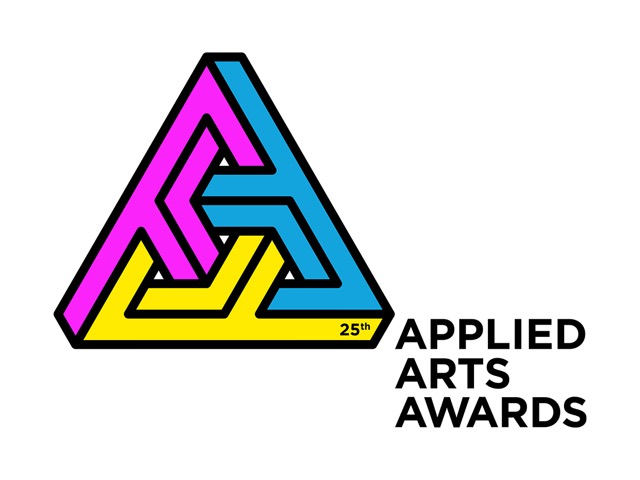 The Applied Arts Awards program is an international recognition of creative excellence and in 2017 celebrates its 25th anniversary. Launched in 1992 by Applied Arts magazine founder Georges Haroutiun, the Applied Arts Awards are the only competition in Canada that not only recognizes the creative work of professionals across the visual communications sector, but also establishes the industry standard in the photography, illustration, design, advertising and interactive disciplines.

To mark this anniversary year, Applied Arts is pleased to launch a new visual identity for the awards (above) that nods to the magazine’s history in the industry and pulls all of its disciplines under the Applied Arts Awards umbrella brand.

Juries of senior-level creative professionals review the submissions and judge entries based on creative merit, technical excellence and suitability for end use. Those that meet a pre-determined cut-off score are published in their corresponding awards annual, equally and without prejudice. Past jury members have included Patrick Scissons of KBS, Claire Dawson of Underline Studio, Claude Auchu of lg2boutique, Cosmo Campbell of DDB Canada, Jordan Doucette of Edelman Toronto, Brian Morgan of The Walrus and Benoit Giguère of La Presse.

When Applied Arts launched the Interactive Awards in 2006, new media and digital applications were completely different from traditional advertising campaigns and design work. In a multidisciplinary 2017, that’s no longer the case. Agencies, studios and individuals now offer a wide array of services, and there are more integrated campaigns than purely digital ones. Digital is everywhere, and in everything. With that in mind, the Interactive Awards will no longer stand as a separate entity. Instead, Applied Arts has reassigned (and, in some cases, expanded) all of the former Interactive Awards categories into special sections within the Design and Advertising programs (Interactive Design and Interactive Advertising, respectively).

Over the past 25 years, Applied Arts has received amazing work from across the country as part of the Applied Arts Awards programs. To recognize this, as well as mark Canada’s sesquicentennial, a new award annual will celebrates the creative work coming out of Canada’s local markets.

In the Community program, work will be evaluated according to population grouping. While each entry is still scored individually, the judges will consider work within the context of the entrant’s market size:

*This category is for those professionals or firms who service neighbourhood and local clients in larger cities. National campaigns for national or large corporate clients should be entered into the other professional awards programs in Photography, Illustration, Design or Advertising.

Open to all forms of commissioned, published, unpublished and personal work from professionals and enthusiasts created between January 2016 and January 2017. Winners will be published in the March 2017 issue.

Open to commissioned and personal work created between February 2016 and February 2017. Winners will be published in the May 2017 issue. Photography categories include advertising, fashion, food, travel, photojournalism and more.

Open to commissioned and personal work created between February 2016 and February 2017. Winners will be published in the May 2017 issue. Illustration categories include graphic novel, pro bono, advertising, editorial, portrait and more.

Open to personal and school course work created by post-secondary students between February 2016 and February 2016. Winners will be published in the November 2017 issue of Applied Arts. Categories include packaging design, illustration, animation, advertising, and a limited number of categories specifically for high school students.

Winners receive their work published in print in one of five awards annuals, a complimentary copy of the award annual their work appears in, their work published online in the Winners’ Gallery and Awards Archive, digital tear sheets of their work, a personalized, embossed awards certificate for every winning entry signed by noted designer and Applied Arts founder Georges Haroutiun, and their work displayed at related Applied Arts events attended by our network of creative professionals.

Every Applied Arts Award winner is eligible to win the Applied Arts Creative Excellence (AACE) Award, our “best in show,” which goes to the highest-scoring entrant in each awards discipline. AACE winners receive a special engraved award, as well as additional coverage in-book.

For more information on the Applied Arts Awards, please contact: