The Future of Design is Yesterday 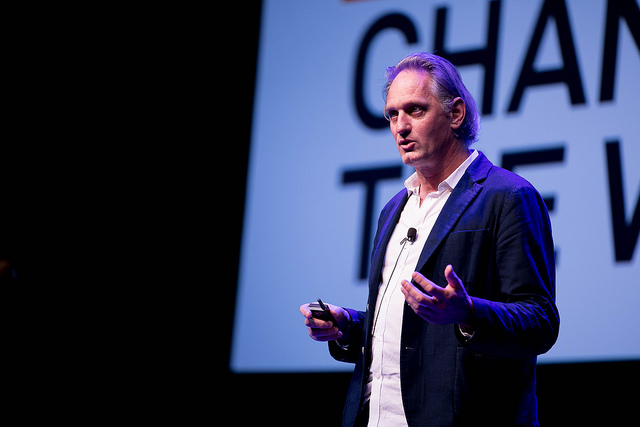 Journalist Ryan Bigge reflects on some defining moments of his 2016 DesignThinkers Conference experience.

Last month, a store called Dupe Shop opened in my eclectic Toronto neighbourhood. Want to make a mix tape? Go to Dupe Shop. Need a cassette version of The Bends by Radiohead? Dupe Shop to the rescue.

It’s a neat idea, but I assumed a cassette-only store wouldn’t last long – until I attended DesignThinkers 2016. That’s because many of this year’s speakers discussed the importance of merging digital with analog. And vice-versa.

Tim Irvine of Fjord shared some physical-digital Makeshop experiments, including a stress ball that tracks emotional triggers (a Fitbit for bad exercise) and a lanyard for cyclists that vibrates in response to car traffic. Irvine believes that “physical prototyping is fundamental to Fjord’s success” because it reverses the current trend toward dematerialization, where circuits and clouds are hidden from users by a sheer, shiny glass screen.

Jake Barton also praised physical prototyping for reducing stakeholder fears about bold new ideas. During the initial phase of the National September 11 Memorial & Museum, Barton and his team built an interactive entrance to prove that visitors could experience the events of 9/11 at their own pace, rather than having history dictated to them. The prototype allowed Barton to iterate on the spot in response to feedback from countless stakeholders over a 40 day trial.

And when a stakeholder didn’t think projecting 9/11 photos onto steel beams would look appropriate, Barton tried it out. To the stakeholder’s surprise, it appeared as though memories were being lifted right out of the metal – and the idea was approved.

Across a dozen very different projects, Barton highlighted how his agency, Local Projects, hides technology so that users can focus on self-expression and creativity. But not every designer wants digital to gracefully recede into the background. For the nearly self-explanatory project “24 Hrs In Photos,” Erik Kessels printed 950,000 digital photographs that were uploaded to Flickr over the course of a single day. Then he crammed them all into an art gallery. The undulating hills and slippery valleys of Flickr photos became a physical data viz project and a highly effective commentary on image overload in the digital era.

The analog past can also offer solutions to current digital challenges. Tobias Frere-Jones began his talk by explaining why most typefaces (even Helvetica) look terrible on screens. (Font hinting and subpixel rendering are the two main culprits). In order to solve this problem, Frere-Jones took a careful look at how lead type was re-proportioned for each size and weight. He discovered that a given font was altered slightly to ensure a typeface looked as clear as possible at every size, while still maintaining a family resemblance. Delving into the technological and stylistic history of typeface design allowed Frere-Jones to develop a “crazy hypothesis” that screen text could be treated as another optical size. The result was Mallory, a digital-first typeface that flourishes on smartphone screens.

Like the last two DesignThinkers I’ve attended, I left the conference with a half-dozen valuable insights that covered a diverse range of topics. Ashleigh Axios shared inspiring stories of making the nearly impossible happen on a weekly basis at the White House Office of Digital Strategy. Anton Repponen & Irene Pereyra walked through the six major emotions they experienced after opening their own design studio. And Bob Hambly RGD shared six ways to keep clients calm in the face of creativity.

As an attendee, I’m always grateful for the diverse and unexpected ideas I discover at DesignThinkers. But as a journalist, it’s my job to spot patterns and themes. Which is why I’ll point out that the closing keynote from David Carson also touched on the tension between bits and atoms.

Carson began by accidently revealing his messy desktop, filled with hundreds of jpgs that brought to mind “24 Hrs In Photos.” But as Carson showed us rusty ice machines and walls of shredded posters, his disorganized laptop became yet another example of how visual distress and distortion can create beautiful accidents.

“I would encourage you to never snap to guides,” Carson said. Twice in fact. “Don’t let the computer make design decisions for you.” That might sound reactionary, but Carson walks the walk – he designed three years of Raygun magazine without page templates or grids and created a new masthead every issue. And he continues to work without a grid to this day.

A few days after the conference I had a chance to visit Dupe Shop, an outpost of design’s strange, hybrid future and another reminder that fast-forwarding into tomorrow can require a thoughtful rewind back to yesterday.
Archive
Tags