Looking Back: DesignThinkers 2015 Branding with Overdrive 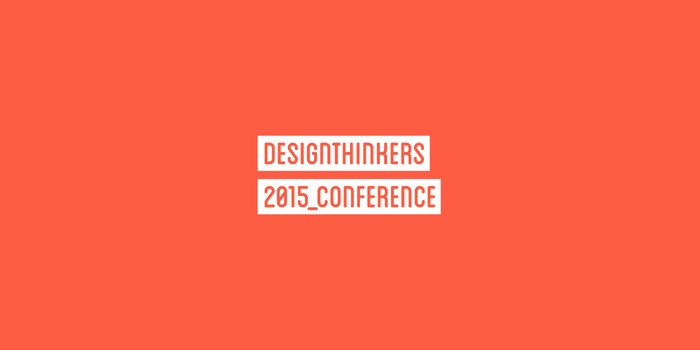 We caught up with James Wilson RGD, Principal at Overdrive Design, to reflect back on their branding for DesignThinkers 2015, Converge, Inspire, Transform.

1. What did taking on the DesignThinkers conference branding mean to you and your team at the time?

1) Our relationship with the RGD goes back to a time when it was in its infancy. The decision to undertake the event was a no-brainer as a gesture of appreciation to the association’s steadfast advocacy for the profession and ongoing support for our studio over the years.

2) It was an opportunity to show off some chops to a discerning and informed audience on a project that we were mostly in control of. You know how you’ve heard: “Life would be better without clients?” It was kind of like that.

2. Explain your concept and how you and/or your team got there?

Each of the designers in the studio submitted an approach but a common thread of “data and analytics” seemed to reveal itself. Likewise, it’s not surprising that the notion of many speakers coming from various parts of the world to talk about many aspects of design to a diverse audience was also a common consideration. We also spring boarded off DT 2014 which was somewhat lighter in tone to push us a little in the opposite direction - not completely serious but I would classify our approach on DT2015 as having more of a concentration on traditional craft. This led to the creation of an aggregate image that we ended up calling “the Super Speaker”. This was actualized in a piece of sculpture which we used as a visual focal point across all pieces of collateral and mediums. A nod to the idea of data became infused throughout typographic details and the use of a grid of dots to represent bits, bytes, people, places and community. The sculpture also physically incorporated the idea of different perspectives. From the front, the sculpture presented itself as a cohesive single portrait composed of images taken of several individuals (studio members and friends) but as a viewer walked around the piece, it transformed itself into a profile of a single human head. This visual interplay in turn supported the tag line: Converge, Inspire, Transform.

3. What was your biggest challenge being the Design Partner for DesignThinkers?

There were several, but for the most part no one to blame but ourselves. 1) Distilling down complexity and interweaving the number of ideas and levels of sub text in communication took more time than we expected. 2) Physically producing the sculpture was a sizeable undertaking. Figuring it out, tons of DIY in making it, many hands, many hours. 3) Scale. A pro-bono project like this requires substantial bandwidth on top of the usual studio workload and deadlines. A bit of a pressure cooker at times. 4) Our budget didn’t quite cover our vision which proved to be an expensive undertaking. 5) Finally, this one. The initial design specified die-cutting a grid of “data dots” out of all of the print collateral. In the first piece, the result was only half successful inasmuch as the die cutting kiss-cut the dots but didn’t punch them out so we sat down as a studio armed with toothpicks and manually popped out nearly a million tiny pieces of confetti. Needless to say the ensuing printed pieces did not undergo that particular special process.

4. How did it feel to present your work to a bunch of designers? And then see your work live during the event and witness people's reactions to it?

Our studio does a lot of work in the B2B space so getting the opportunity to be public facing with our peers and colleagues was really fantastic. I would describe the day of the event as giving birth with all of the joy and none of the pain. Reaction was great. Mostly positive but apparently also polarized as we heard from a couple of people who really didn’t like it as well. All good though. Everyone seemed to have an opinion versus none. The coolest part was watching people use the Sculpture as a landmark in the main atrium to “gather” or to take selfies and talk about the event. And…we continue to get residual airplay from the project. 5. What are you most proud of from your own experience? Is there anything you would have done differently? Most proud: Getting it done. In terms of horsepower and sheer output I felt the members of the studio lifted well above their weight. Everyone pulled together with real effort and commitment. Done differently: Never hand punch a million dots out of thousands of pieces of paper ever again.

6. What has been your favourite DesignThinkers branding, besides your own, and why?

Now that we have first hand knowledge of what every other studio went through to get this out their particular door, there’s only respect. Did I just escape that question?

Stay tuned for more insights into DesignThinkers branding from the past 20 years.

Register now for DesignThinkers TO 2019!